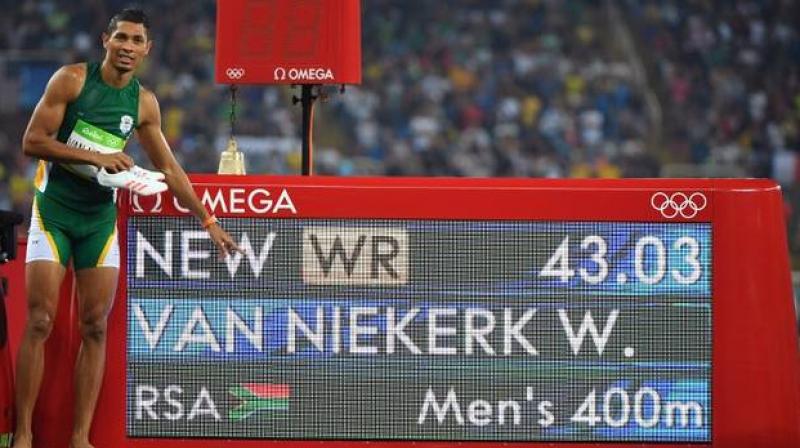 Mumbai: It’s very rare to achieve a triple distinction in athletics, but for South African track and field sprinter Wayde van Niekerk – who is the current world record holder, world champion and Olympic champion in the 400 meters – it’s just a stepping stone.

Van Niekerk, 24, clocked a world record time of 43.03 seconds to break the previous world record (43.18) set by USA's Michael Johnson during 1999 World Championships. His performance has also seen him nominated for the 2017 Laureus World Breakthrough of the Year Award. Following are some excerpts from the interview.

It was a fantastic performance in Rio, do you have one particular memory from the race?

Wayde van Niekerk: I think from that last 50 metres all the way to the end of the race, when I had the opportunity to share the moment with my friends and family and later on with the South African team. Seeing the inspiration that I felt gives me the hunger to keep on wanting to do great things for the country and for my friends.

Which delighted you more: the gold medal, or beating Michael Johnson’s 17-year record?

Wayde van Niekerk: I don’t think you can put them together in the same category, but to me I feel that at the age of 24 it was just another stepping stone. I don’t want to dwell too much around the fact that I won the Olympic gold medal and broke the world record because I have so much more to do as an athlete. Right after the Olympics so much has changed in my life, I can put my family and friends in a better position and give them a better life and that’s my biggest motivation for wanting to continue what I’ve done.

Before the race, did you think there was a possibility you would break the record? You had to beat Olympic champions LaShawn Merritt and Kirani James?

Wayde van Niekerk: I struggled with an injury in the year and I just wanted to give that final race my everything, and that’s what I did. I had so much respect for the competition. Not just LaShawn Merritt and Kirani James, but there was a full line-up of quality guys and real professional athletes that I respect so much and I went out there and showed my respect by putting out a competitive race.

You are only 24. Do you have a career plan of what you would like to achieve?

Wayde van Niekerk: I definitely won’t be neglecting the 400m. There is so much more I can achieve in the 400m, but at the same time I want to go back to why I started in track and field and that was the 100m and 200m. I’d like to put more effort there and try and achieve great things within my event and within the 100m and 200m as well and try and rewrite whatever history I can and have as great as possible performances as I can.