Now, Asiad medallist Rajiv is ready for his wedding

Rajiv said Indian athletes would do even better with a professional league. 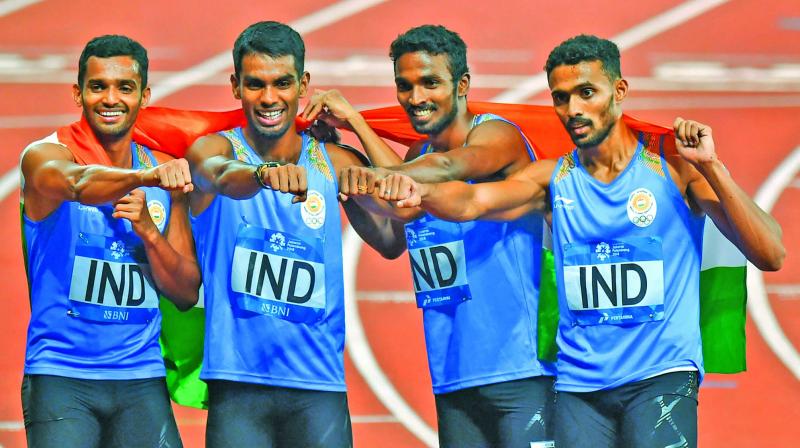 Chennai: The 18th Asian Games are responsible for S. Arokia Rajiv’s single status. Rajiv was to have tied the knot earlier this year after getting engaged in October, 2017 but the single-lap specialist postponed his wedding to concentrate on the Asian Games in Indonesia. The Army man has vindicated his decision by anchoring India to two relay silver medals in Jakarta.

“I’m getting married next month. I postponed my wedding after quite a few friends warned me that I wouldn’t be able to concentrate on the Asian Games. I don’t regret my decision because winning a medal required a lot of hard work,” said Rajiv, also a bronze medallist in the 400m at the 2014 Asian Games.

Rajiv overcame abject poverty on his way to glory like many Indian athletes is thrilled that he will receive Rs 60 lakh from the Tamil Nadu government for his Asiad exploits. “There is plenty of athletic talent in rural areas. But children from poor families need support in their formative years. I request the government to provide shoes and other equipment free of cost to talented, young athletes,” he added.

Rajiv, who is from Lalgudi near Tiruchi, was vital to India’s silver in the men’s 4x400 relay on Thursday as he held off the spirited Japanese challenge in the anchor leg. “All of us did well in the race. Beating the world-class Qatari team was almost impossible. I’m glad that we managed to win silver. We could have won gold in the mixed 4x400 relay had our women been a little faster,” he added.

India have done exceptionally well in athletics at Jakarta, winning five gold, 10 silver and two bronze. After an embarrassing performance at the 2016 Rio Olympics, Indian athletes have redeemed themselves at the 2018 Asian Games. Rajiv said Indian athletes would do even better with a professional league. “I’m sure a league with attractive cash prizes would raise our standards dramatically. We need motivation to give our best and a professional league is the way forward,” he added.

Indian athletes have won medals at the Asian Games despite the Athletic Federation of India (AFI), which has done nothing apart from conducting camps on the union sports ministry’s money. It is high time the AFI woke up and worked harder to start a pro league, which has transformed the face of a rural sport like kabaddi.