Rahil Gangjee shot 1-under par to lie in tied 18thspot. 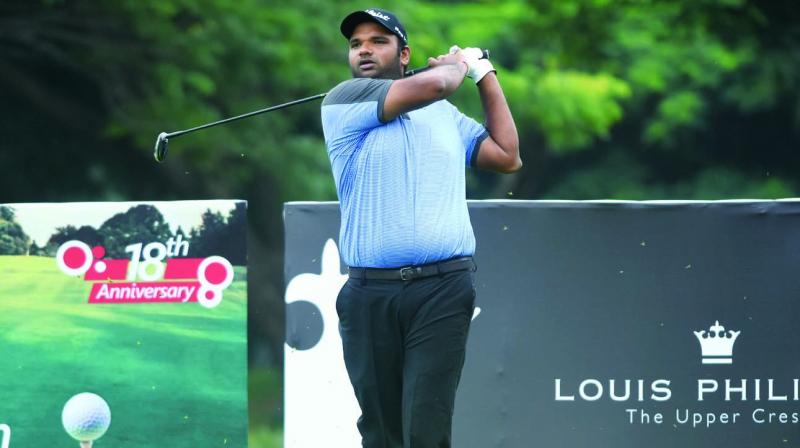 Udayan Mane in action at Bengaluru on Tuesday.

New Delhi: Udayan Mane and former PGA Tour player Miguel Carballo of Argentina grabbed the early lead with identical rounds of 63 (7-under par), after round one of the inaugural Louis Philippe Cup, a $75,000 Asian Development Tour and Professional Golf Tour of India co-sanctioned event, which got under way in Bengaluru’s Prestige Golfshire Club course on Tuesday.

In overcast and windy conditions interrupted by light drizzles, the Ahmedabad-based Mane, a regular winner on the PGTI tour in the last couple of years, played out a stellar round sinking seven birdies. Carballo, on the other hand, had eight birdies but a bogey on the tricky hole 16, meant he lost the chance to shoot into outright lead.

Carballo, playing his first season in Asia, is in red-hot form registering five top-10 finishes this year on the ADT in the six tournaments played so far.

“I played a bogey free round, but the course was very challenging and for once not to be taken for granted. I am glad to be in the joint lead but we still have three more days to go. The plan forward is to execute as per the plans as the course is set up in such a way that there isn’t any margin for errors,” said Mane.

Trailing in tied sixth position was the local pair of Khalin Joshi, currently placed 18th on the Asian Tour Habitat for Humanity Order of Merit rankings, and Harendra Gupta on 4-under par and three shots behind the leaders. Among pre-tournament favourites, Australia’s Marcus Both, a three-time winner on the Asian Tour, secured a place just outside the top 10, his round of 2-under putting him into tied 12thposition on the leaderboard. Rahil Gangjee shot 1-under par to lie in tied 18thspot.