Bolt has dominated sprinting since taking double individual gold at the Beijing Olympics in 2008. 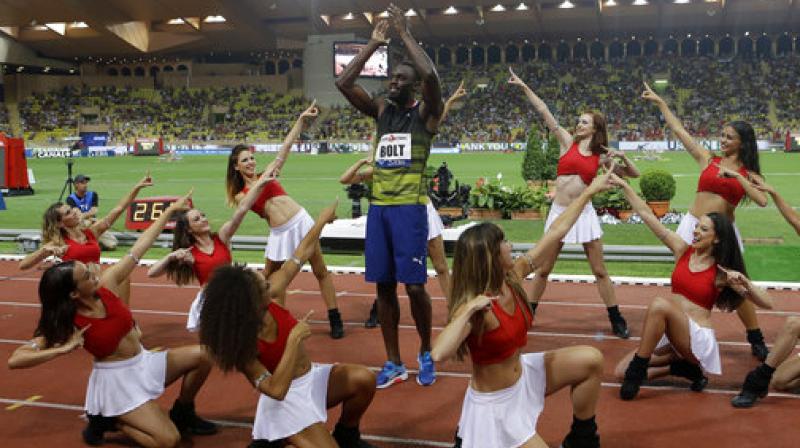 A file photo of Usain Bolt, surrounded by cheerleaders, at the IAAF Diamond League Athletics meeting in Monaco in July. (Photo: AP)

London: Sprint superstar Usain Bolt will seek a final golden hurrah when he takes to the track at the IAAF World Championships in London this week.

Bolt has dominated sprinting since taking double individual gold at the Beijing Olympics in 2008, going on to win a further six Olympic golds and also picking up 11 world titles.

The 30-year-old scored triple gold at both the 2012 and 2016 Olympics in London and Rio, his sole hiccup being stripped of his 2008 Olympic relay gold after teammate Nesta Carter failed a drugs test.

“My main aim is just to win (in London). I just want to retire on a winning note,” Bolt said recently.

Bolt has opted not to defend his 200m world title, meaning he will not race against South Africa’s Wayde van Niekerk, the athlete Bolt has tipped to take over as the next track and field superstar.

“That’s one of the most disappointing things in my career now,” he said. “He came along at this late stage and I didn’t get to compete against him, because I think he’s one of the best now.”

Bolt’s rivals will, for once, be glad to see the back of a man but the sport of athletics will be far less enthusiastic about bidding a final farewell to the charismatic Jamaican.

In the simple matter of who will take his place at the top of the 100 metres podium either at or after London, Canada’s Olympic sprint medallist Andre de Grasse appears to be just ahead of the pack as the leading candidate.

“(De Grasse) shows up when it counts. That’s the mark of a veteran. Even though he has been in the sport not too long,” Justin Gatlin, Olympic gold medallist in 2004 and runner-up behind Bolt in Rio last year, said.

South Africa also has a new generation of stars, led by Akani Simbine and Thando Roto, although with their national championships taking place in March, peaking twice in one season could hinder their hopes of victory in London.

Christian Coleman put himself on the map when he ran 9.82 seconds, the fastest time this year, during the U.S. Collegiate championships, while Trayvon Bromell won bronze at the world championships two years ago aged just 20.