The Arrows coached by Floyd Pinto came up with an inspiring performance in the I-League 2018-19 to finish 8th among 11 teams. 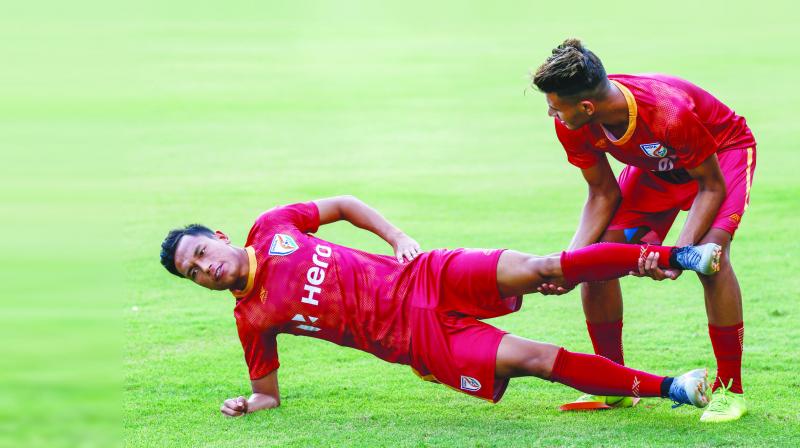 Amarjit expressed that the “invaluable experience” with Arrows helped them “reap the benefits” in 2018-19.

Young footballers, including 2017 U-17 World World Cup captain Amarjit Singh, hailed the Indian Arrows side for their development.

The senior national preparatory camp for the forthcoming Intercontinental Cup also has Anwar Ali and Narender Gahlot. All these youngsters have been a part of the Indian Arrows project, with Amarjit and Anwar having been part of the Indian U-17 World Cup team.

“Honestly speaking, the Arrows project has laid the foundation for us. It allowed us to bloom. I am just so grateful,” Amarjit, the first player born in the 21st century to represent the Blue Tigers, said.

“Whatever I have matured as a player, the entire credit goes to the Arrows.”

The Arrows coached by Floyd Pinto came up with an inspiring performance in the I-League 2018-19 to finish 8th among 11 teams. They are a developmental project team with 19, 18, 17, and even a 16-year old in their ranks.

Amarjit expressed that the “invaluable experience” with Arrows helped them “reap the benefits” in 2018-19.

“Had I joined any other club, I would have struggled to get enough game-time. That would have hampered my growth as a player,” Amarjit, who had captained India in the FIFA U-17 World Cup mentioned, told AIFF.com.

“The glitz and glamour might be missing in our Arrows, but the results are there for all to see. We struggled in the first season, but gathered some invaluable experiences in the next.”

Narender Gahlot, a defender from the developmental squad who has been called up by national coach Igor Stimac maintained that “rubbing shoulders with foreigners and experienced Indian players” helped hone the skills immensely.

“Playing against quality foreigners, and experienced Indians helped me a lot. In the first season, we had little ideas about facing them. But we matured, learnt, and tried to implement in the second season,” Narender said.

Anwar Ali said, “My confidence as a player has grown immensely as I have been playing against sturdy and quality foreign recruits. I have earned a call-up to the India U23 national team and the senior team camp. Now, it’s my duty to repay the faith that the coach has shown to me.”