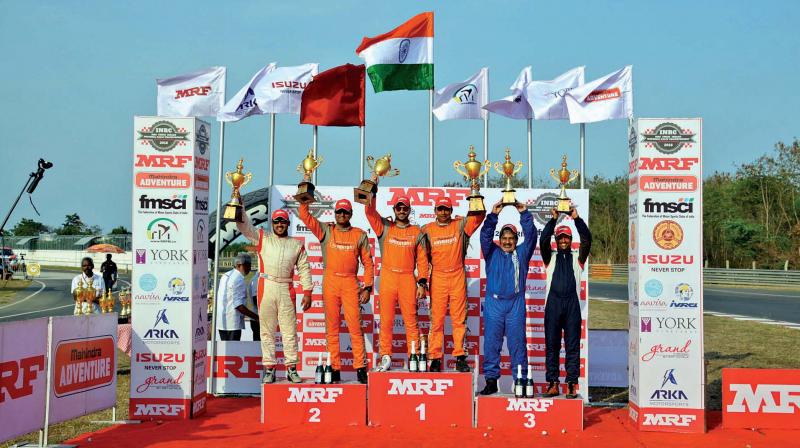 The city-based Team Mahindra Adventure driver, along with Musa Sherif as co-driver, bettered his own previous day’s performance by 27 seconds for an aggregate timing of 1 hour and 28:43.1 minutes to complete the total distance.

Gill’s teammate Amittrajit Ghosh made up time in a dramatic fashion to finish second. With Ashwin Naik as co-driver, he went all out in the final three stages to jump from the third position to the second for a spectacular finish.

Amittrajit, who is still recuperating from last season’s nasty accident, looked fearless as he kept pace with Gill in most of the stages for an impressive timing of 1 hour 30:39.6 minutes.

INRC 2 driver Karna Kadur (Arka Motorsports) had to settle for the last place on the podium despite being ahead of Amittrajit till virtually the end. He and co-driver Nikhil V Pai would, however, take solace for claiming the top position in the INRC 2 class, ahead of last year’s winner Rahul Kanthraj.

Gaurav Gill was expectedly pleased with his victory. “We had a great day and hats off to the team who have put the car together,” he said, just after completing his victory. “It is a brand new car and there were a few issues at the start but we overcame them and had a great weekend. It is a great start to the season and I am glad about the win,” he added.

As many as seven teams could not complete the rally, including Arjun Rao, but Younus Ilyas would consider himself the unluckiest. He had looked sharp to finish second on Day 1 and impressed in Day 2’s first stage, the SSS 2, but his gearbox broke down in the next to pull him out of the reckoning.