The 38th edition of WrestleMania, the biggest and oldest event of WWE will see biggies Roman Reigns and Brock Lesnar in the main event 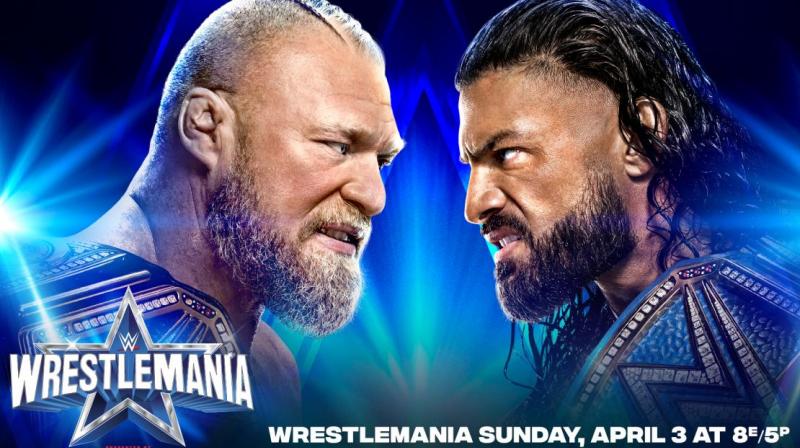 The SmackDown & Hall of Fame, NXT Stand & Deliver, two-day WrestleMania and Monday Night Raw are shows that are bound to have wrestling supporters jump out of their seats. (Image credit: Twitter/@WrestleMania)

Dallas (Texas, USA): It doesn’t get bigger than this. Action packed wrestling entertainment lies in store over the weekend as WWE has lined up a series of events that have the fans hooked with star-studded match cards.

The SmackDown & Hall of Fame, NXT Stand & Deliver, two-day WrestleMania and Monday Night Raw are shows that are bound to have wrestling supporters jump out of their seats.

The 38th edition of WrestleMania, the biggest and oldest event of WWE will see biggies Roman Reigns and Brock Lesnar in the main event on Sunday.

Meanwhile, Ronda Rousey will challenge SmackDown Women’s Champion Charlotte Flair in the title match on Saturday. After a history of injuries and fractures, Raw Women’s Champion Becky Lynch will put her title back on the line against Bianca Belair. The match card also has father-son duo Rey and Dominik Mysterio taking on The Miz & Logan Paul; SmackDown Tag Team Champions The Usos up against Shinsuke Nakamura & Rick Boogs and Drew McIntyre fighting Happy Corbin.

Women’s Tag Team champions Queen Zelina and Carmella will also be seen in a match against Sasha Banks & Naomi, Rhea Ripley & Liv Morgan, and Natalya & Shayna Baszler on Sunday. Also in action would be The Street Profits against Raw Tag Team Champions RK Bro and Alpha Academy in a triple threat match. The card also provides for some interesting clashes — Edge vs AJ Styles and Pat McAfee vs Austin Theory.

All of this will be on Sony Sports Network as well as live-streamed on its on-demand OTT platform SonyLIV. Rajesh Kaul, Chief Revenue Officer, Distribution and Head — Sports Business, Sony Pictures Networks India, is understandably excited. “WrestleMania has been the biggest live event of WWE for nearly four decades now and has received immense love and support from followers across the globe. The fandom for WWE in India has been growing steadily over the years and it is our endeavour to provide viewers with the thrill and excitement of WWE coupled with unique experiences. For the first time, audiences in India will witness Wrestlemania Live, in four languages across three channels. The glorious event not only attracts fans but is also a haven for advertisers. We are happy to have sponsors on-board across the entertainment, communication, and FMCG sectors,” he said.