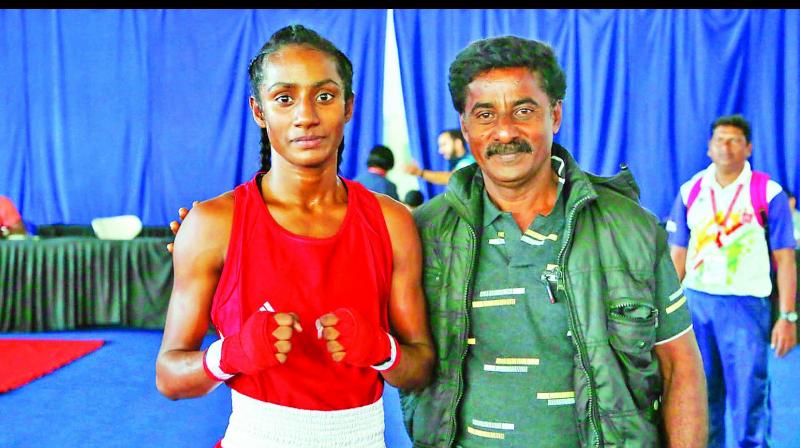 S. Kalaivani is living her father’s dream. The doughty girl achieved what her father, M. Srinivasan, longed-for as a boxer — winning a medal for the country.

The 20-year-old Chennai girl won the gold at the 2019 South Asian Games in Nepal and she was the toast of the recently concluded Khelo India Youth Games where she dominated the 48kg category.

“My  father faced a lot of criticism for putting me in the boxing ring. My grandparents and relatives were against it. Their worry was that no one would marry me if I sustain an injury,” recalled Kalaivani.

As Kalaivani brought laurels by winning medals at the national level, the criticisms turned compliments. “Now the same relatives want the share of the pie. They are proud of my achievements,” Kalaivani laughed.

Kalaivani was in Class four when she first donned the boxing gloves. Srinivasan, a former national-level pugilist who became a farmer after quitting the sport, wanted his son, Ranjith, as well as daughter excel in boxing.

“I used to train them at home. Then I took them out and made them run on bridges across Chennai. She put in a lot of hard work to come up in her career. My son had to quit because of financial reasons and all our focus shifted on Kalaivani’s career,” said Srinivasan.

She is currently at a national camp in New Delhi sweating it out for under-22 Asian Championship in March. “I am far away from home for so long. I miss my parents,” said Kalaivani, a third-year student of B.Sc Physical education at GTN Arts College in Dindigul.

Kalaivani weighs 48kgs and the category is not part of the Olympics. She said she would continue to fight in this category for two more years before moving up.

“I have to win more medals and I have a long way to go. My immediate goal is to do well in the under-22 Asian Championship,” she added.