Have a sporty new year

While the year gone by had the Champions Trophy, and the FIFA U-17 World Cup that the city hosted, 2018 promises to be an action-packed one as well. 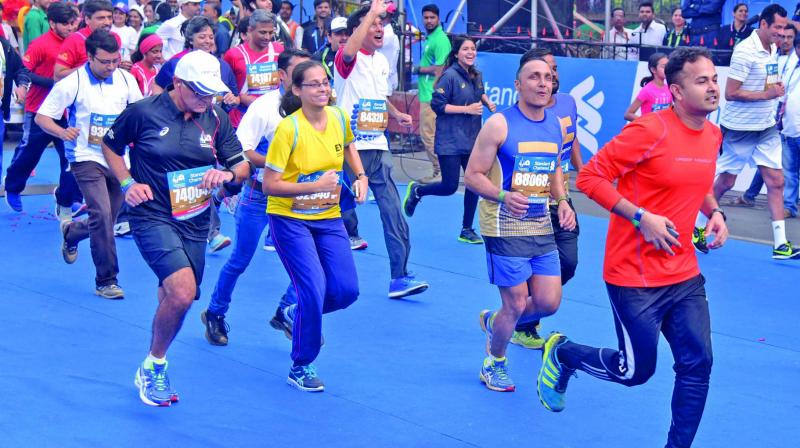 The streets of South Mumbai will be filled with over 42,000 runners in the Mumbai Marathon on January 21.

While the year gone by had the Champions Trophy, and the U-17 football World Cup that the city hosted, 2018 promises to be an action-packed one as well. Take a look.

January alone boasts of cricket, the marathon and tennis taking over the city and Maharashtra. Rest assured, sports have a packed schedule this year. Between the U-19 cricket team off to win the World Cup again and the ATP World Tour 250 series coming to Maharashtra, there’s a little going on for everyone with sports.

Cricket
Unfortunately, 2017 ended on a cheerless note for Mumbai cricket, with the side crashing out of the quarterfinals against the formidable Karnataka side in the Ranji Trophy. The side will start the New Year with the T20 Zonal League that starts from January 7. Mumbai will play Baroda in the first West Zone game.

The matches of Zonal T20 league will be played from January 6 to 18, prior to the glamorous Indian Premier League’s auction in order to allow the players to prove their mettle. The Mumbai outfit finished on top of the West Zone table after winning all of their four matches. Aditya Tare will be hoping for a similar outcome this year as well.

The league will be followed by Syed Mushtaq Ali T20 Knockout (Jan21 to 27) where the same squad may feature again.  With Kohli and Co. out for the test series in South Africa, M.S. Dhoni could also mark his return to domestic cricket with Jharkhand. And as soon as the T20 party gets over, 50-over competition Vijay Hazare Trophy is set to commence from February 5. In the previous edition, teen sensation Prithvi Shaw made his debut in the limited overs domestic format.

Marathon
The streets of South Mumbai will be filled with over 42,000 runners in the Mumbai Marathon on January 21. This edition will mark 15 years of the race, with TATA taking over as the title sponsor. A mixed swarm of Bollywood, quirky outfit runners and those who have been practicing for quite some time will rub shoulders in the marathon.

For the 15th edition of the marathon, the organisers have specials categories for children aged 15 to 18 and women in the Timed 10k category raised by charity. With USD 405,000 as prize money, the event will witness over thousands of participants across six different race categories.

U-19 World Cup begins
Mumbai’s newfound opener Prithvi Shaw is leading the Indian contingent for the ICC Under-19 World Cup. The colts will face Australia U-19 in their first match on January 14 at the Bay Oval Stadium, New Zealand. This will be followed by Papua New Guinea and Zimbabwe.

The group fixtures do not pose a major challenge for India U-19. Top two teams from each group will go on to play the quarterfinals. For the last couple of editions, the Indian side has failed to get the silverware home. Unmukt Chand was the last Indian skipper to lift the trophy in 2012. With Rahul Dravid as the coach and Shaw in good touch, the colts stand a chance of winning the trophy.

Tennis
After a long wait, Maharashtra’s tennis courts will host an ATP World Tour 250 Series, starting today to January 6. The Mhalunge Balewadi Stadium, Pune will be the spot to catch the Tennis stars.

In the pool of world’s top tennis players, world rank number six, Marin Cilic will be a major attraction for the fans. His match with Giles Simon, who is looking to recover his form in the tournament, will be something to look forward to.

Football:
Manchester United legend Ryan Giggs applauded the zeal and enthusiasm of the city when he represented the Mumbai franchise in the Premier Futsal League. And why wouldn’t he? Mumbai hosts a tremendous number of local leagues with different divisions for budding footballers. When the Indian Super League team Mumbai City FC is playing its games at the Mumbai Football Arena, Andheri, there is an army of blue jerseys creating a splendid atmosphere around the stadium. The Ranbir Kapoor-owned team will play five more league games at the Andheri stadium with the next home fixture against Kerala Blasters on January 14.

MDFA’s Elite League that features the top clubs of the city will resume in January with the Super Division kicking-off shortly in the same month.

The Premier Futsal League will return in the second half of the year with the venue being National Sports Club of India (NSCI). Ronaldinho, Paul Scholes and Giggs were the marquee players for their respective franchises for this season of the short format.