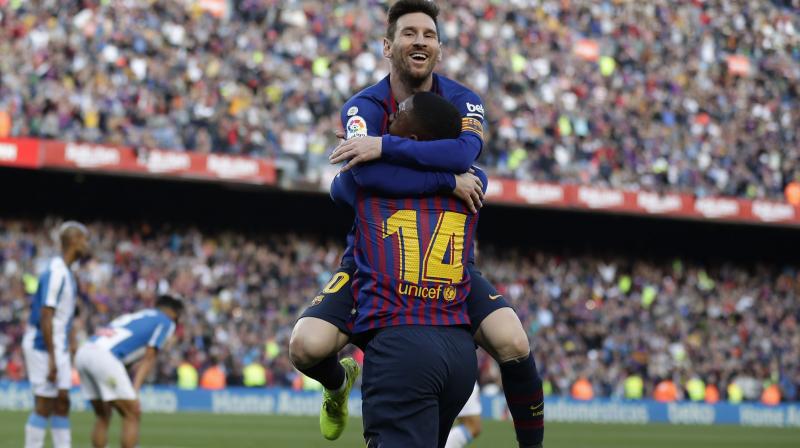 With second-placed Atletico Madrid travelling to Alaves later in the day, the champions took advantage of the chance to extend their lead. (Photo: AP)

Barcelona: Lionel Messi scored twice to earn Barcelona a 2-0 derby win over Espanyol and send them 13 points clear at the top of La Liga on Saturday.

With second-placed Atletico Madrid travelling to Alaves later in the day, the champions took advantage of the chance to extend their lead.

A dull match was decided by Barcelona’s number 10, who lofted home a free kick after 71 minutes and slotted in from substitute Malcom’s cross towards the end.

Messi, the division’s top scorer with 31 goals, suffered criticism in his native Argentina after withdrawing from a friendly against Morocco because of a groin problem, but was hailed by Barcelona fans after taking them one step closer to retaining the title.

“The important thing is that (Messi’s) on our side, he scored a great free kick and without doubt having him is always an advantage for us,” said midfielder Sergio Busquets.

“Espanyol were ultra-defensive and it made it hard to find spaces. We had opportunities but they didn’t go in.

“We had to work for it but in the end we took our chances and the result was justice for what happened in the game.”

Ernesto Valverde started Messi along with Luis Suarez, who had recovered from an ankle sprain.

But the duo and Philippe Coutinho were kept quiet in a tight first half, with Espanyol’s five-man defence not giving the South American trio any space.

With Malcom’s introduction in the final half hour, the game began to open up.

The Brazilian winger had a cross shot tipped wide by Diego Lopez, with Coutinho firing over the bar as Barcelona pushed for a winner.

The Catalans were short on inspiration until Messi produced a cheeky dinked free kick, which midfielder Victor Sanchez could not keep out on the goal-line, before tucking home his second on the break.

Barcelona were far below their fluid best but two moments of skill from talisman Messi secured three points from an otherwise forgettable game.

“I advise you to enjoy Messi while he’s here, he’s such a unique player,” Espanyol coach Rubi said.

“When he’s not there you really notice it. He’s very good and that’s that. I had the luck to see him for a year in training (in 2013 at Barca under Tito Vilanova).”