Alcacer fired in a freekick from the edge of the box and added another in the fourth minute of stoppage time to lift Dortmund to 63 points. 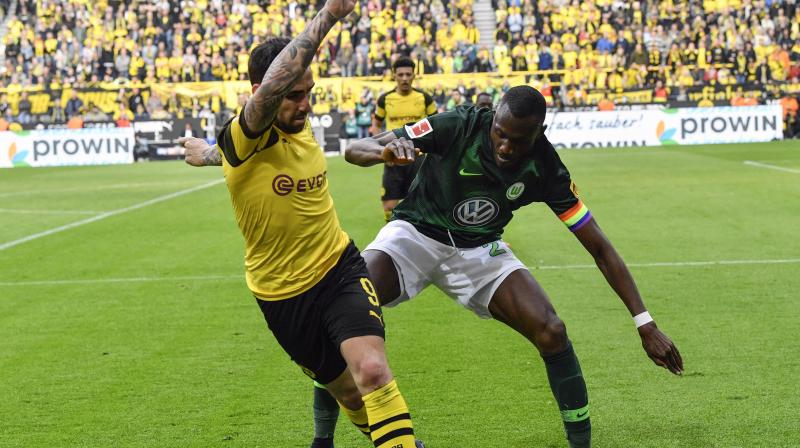 A pigeon that had camped in the Dortmund box and stubbornly refused to leave was by far the most interesting incident until the break. (Photo: AP)

Berlin: Paco Alcacer scored twice in stoppage time to give Borussia Dortmund a last-gasp 2-0 victory over VfL Wolfsburg and put them two points clear at the top of the Bundesliga table ahead of next week’s big game against champions Bayern Munich.

Alcacer fired in a freekick from the edge of the box and added another in the fourth minute of stoppage time to lift Dortmund to 63 points, with Bayern on 61 after their 1-1 draw at Freiburg.

“We kept believing that we can still score at home,” said Dortmund’s Mario Goetze. “It was extremely hard and Wolfsburg were playing really well.”

“We had a bit of luck in the end but also a lot of quality. We know we can remain dangerous until the end and turn games around.”

With captain Marco Reus a last-minute absence due to the imminent birth of his first child, Dortmund rarely had a chance in a lacklustre first half for the sold-out 81,000 crowd.

A pigeon that had camped in the Dortmund box and stubbornly refused to leave was by far the most interesting incident until the break.

Dortmund, who in December were nine points clear of Bayern before a slump in form in February and March, picked up the pace somewhat after the break.

But neither Jadon Sancho nor Raphael Guerreiro could beat Wolfsburg keeper Koen Casteels and the hosts had to wait until the very end for Spaniard Alcacer to release a slightly deflected free kick in the first minute of stoppage time.

He then tapped in his 16th goal of the goal of the campaign a little later after fine work from Sancho to seal the three points and earn their second last-minute win in a row.

But there was some bad news for Dortmund with Achraf Hakimi and Abdou Diallo taken off injured in the second half, with the Bayern match looming.