All the Italian teams in European action this week warmed up with wins with Napoli seeing off promoted Brescia. 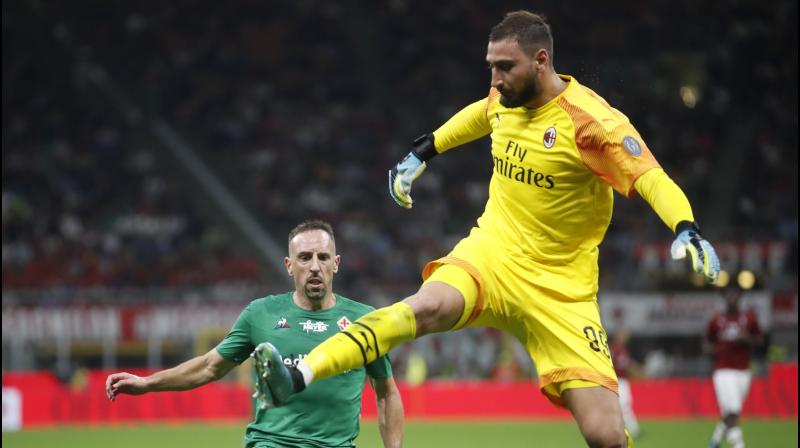 Napoli got back to winning ways with a 2-1 victory against Brescia on Sunday as Franck Ribery sealed a 3-1 win for Fiorentina against ten-man AC Milan that pushed the northerners down to 16th in the Serie A table with a third consecutive defeat. (Photo:AP)

Milan: Napoli got back to winning ways with a 2-1 victory against Brescia on Sunday as Franck Ribery sealed a 3-1 win for Fiorentina against ten-man AC Milan that pushed the northerners down to 16th in the Serie A table with a third consecutive defeat.

All the Italian teams in European action this week warmed up with wins with Napoli seeing off promoted Brescia despite Mario Balotelli scoring his first goal for the newcomers.

First-half goals from Dries Mertens and Kostas Manolas ensured Napoli took all three points after their midweek loss to Cagliari, to boost their confidence ahead of a Champions League trip to Belgian club Genk.

Carlo Ancelotti's side stay fourth with 12 points from six games, six behind league leaders Inter Milan who beat Sampdoria 3-1 on Saturday, before they play Barcelona in Europe.

"Suffering is natural in these games if you don't kill it off with 3-0 and then concede a goal, it all opens up again," Ancelotti told DAZN.

"But all in all I'm satisfied.

"We played an excellent first half, the second was less impressive, but it was very hot and the players were tired." Inter have a maximum 18 points from six games -- two ahead of Juve -- after winning their first six league matches for the first time since the 1966-67 season.

Champions Juventus beat SPAL 2-0 to stay second with Atalanta third -- a point ahead of Napoli -- after thrashing Sassuolo 4-1 on Saturday.

Ribery scored the third goal after 77 minutes to add to Gaetano Castrovilli's 66th-minute effort with Erick Pulgar slotting in a penalty on 14 minutes.

Milan played most of the second half a man down after Mateo Musacchio was sent off for a foul on Ribery on 55 minutes.

Milan goalkeeper Gianlugi Donnarumma did well to deny Federico Chiesa's penalty kick with Rafael Leao pulling a goal back for the hosts ten minutes from time.

Balotelli carried his daughter Pia, who lives in Naples with her mother and was decked out in the Napoli colours, onto the pitch at the San Paolo Stadium.

Ancelotti's side went ahead after 13 minutes.

Mertens connected with a Jose Callejon cross to blast in his 114th goal in a Napoli jersey -- one shy of Argentine legend Diego Maradona's total from 1984 to 1991. Slovak Marek Hamsik leads both with 121.

Manolas thought he had scored six minutes later but the goal was ruled out after a VAR review. The Greek defender did head in just before the break off a Mertens corner.

Then in a nervy final half hour Balotelli got his head to a Sandro Tonali corner to serve notice to Italy coach Roberto Mancini of his ambitions to play at Euro 2020.

It was his first goal in Italy in four years but Balotelli's losing streak to Napoli stretched to eight games -- having never won while playing for both Milan clubs, Manchester City, Nice and now Brescia.

Brescia slip to 15th in the table.

Elsewhere, both Roman clubs also warmed up for their Europa League games with wins after Serie A losses during the week.

Edin Dzeko's header, his fourth goal in six games, made the difference for Roma against promoted Lecce, whose goalkeeper saved an Aleksandar Kolarov penalty.

Lazio eased past Genoa 4-0 largely thanks to Ciro Immobile, who scored the final goal and set up another, with Sergej Milinkovic-Savic, Stefan Radu and Felipe Caicedo also on target.

Roma are fifth, a point behind Napoli, with Lazio a further point back in sixth.