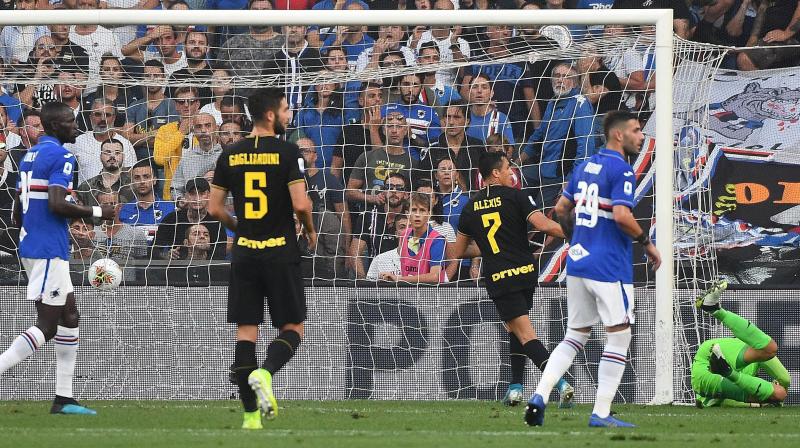 Alexis Sanchez scored and was sent off in his first start for Inter Milan as the Serie A leaders maintained their perfect record with a 3-1 win at Sampdoria on Saturday. (Photo:AP)

Milan: Alexis Sanchez scored and was sent off in his first start for Inter Milan as the Serie A leaders maintained their perfect record with a 3-1 win at Sampdoria on Saturday.

The match turned on its head a minute into the second half when Sanchez was shown a second yellow card for simulation and Jakub Jankto pulled back a goal for Sampdoria with 35 minutes still to play.

But Roberto Gagliardini pounced to seal the three points for Inter, who have won their first six league games of a season for the first time since 1966-67 and only the second time in their history.

“Fortunately, the way it finished, I can look at the glass half full,” Inter coach Antonio Conte told Sky Italia.

“I’d prefer a more relaxed match on an emotional level, as we absolutely dominated the first half and were in complete control.

“Finding ourselves in that situation and emerging with a victory fortifies us. It helps us realise we can consolidate success and continue playing our football even when down to 10 men.”

The victory restored Inter’s two-point lead over Juventus at the top of the table ahead of a meeting between the sides at San Siro next Sunday, while Sampdoria are rooted to the bottom of the table after taking three points from the opening six rounds.

Inter boss Conte made several changes to his side ahead of Barcelona’s visit in the Champions League on Wednesday, resting Romelu Lukaku, Diego Godin and Nicolo Barella and giving Sanchez his full debut.

In a meeting of the top and bottom sides in the league, Inter got off to a fast start as Sensi’s shot from distance took a big deflection off Sanchez on the way in and the goal was awarded to the midfielder despite the Chilean celebrating it as his own.

Sanchez needed only two more minutes to open his account for the club as he latched on to a mis-hit Sensi effort to slot home from close range.

However, things took an ugly turn for the 30-year-old when he was shown a second yellow card for diving inside the box a minute into the second half, meaning he will be suspended for the clash with Juventus.

The incident spurred the home side into life and they were given hope when Jankto span in the box and fired a low shot into the bottom corner after 55 minutes.

However, their rally was short-lived as Gagliardini pounced on an Emil Audero parry to bundle in a shot from close range and condemn Eusebio Di Francesco to his fifth defeat in six games as Sampdoria coach.

Atalanta strengthened their grip on third place with a resounding 4-1 win at Sassuolo.

Gian Piero Gasperini’s side put the result beyond doubt before halftime thanks to two goals from Alejandro Gomez and strikes from Robin Gosens and Duvan Zapata, while Gregoire Defrel netted a consolation for the visitors after the break.

Atalanta occupy third place on 13 points but Napoli, Cagliari and Torino are behind them on nine points and can reduce the gap in Sunday’s fixtures.