The stalemate with Atletico meant that for the 1st time in either of Zidane’s eras at the club, Madrid have kept 3 consecutive clean sheets. 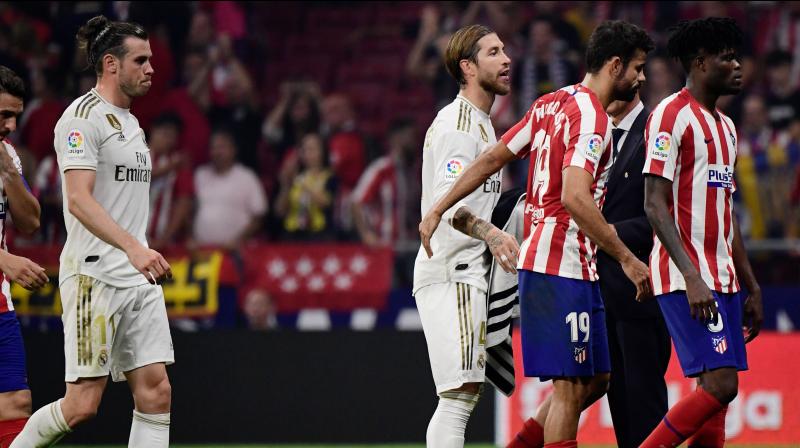 Real Madrid’s goalless draw with Atletico Madrid on Saturday in La Liga was not an entertaining spectacle but it proved Sergio Ramos’ side are heading in the right direction. (Photo:AFP)

Madrid: Real Madrid’s goalless draw with Atletico Madrid on Saturday in La Liga was not an entertaining spectacle but it proved Zinedine Zidane’s side are heading in the right direction.

After conceding in each of their first five matches in all competitions, drawing with Valladolid and Villarreal in La Liga and suffering a 3-0 thrashing by Paris St. Germain in the Champions League, Spanish media said Real Madrid were in crisis.

However wins over Sevilla and Osasuna and the derby draw at the Wanda Metropolitano have left Madrid top of the table with 15 points from seven matches.

The stalemate with Atletico meant that for the first time in either of Zidane’s eras at the club, Madrid have kept three consecutive clean sheets in the league.

“Everything that you can add is good and I think that our morale is really high at this moment.”

Madrid conceded nine goals in their first five games but have steadied the ship, much to the delight of Zidane.

The coach picked Fede Valverde to play in midfield with Casemiro and Toni Kroos, instead of the more attacking options of James Rodriguez or Isco.

“(Valverde) did very good work for the team, he always gets involved, he’s improving,” said the French coach. “I took that decision, he played well and I took him off because he felt something; I’m happy with his work.

“We deserved more than a point, I’ve got to congratulate my players because we were solid, keeping a clean sheet.

“We were really good defensively, we’re lacking something going forward but we’re working on that.”