Will aim for top four: Pradhan

The 29-year old right-winger who came to the city as a teenager now eyes an ISL title. 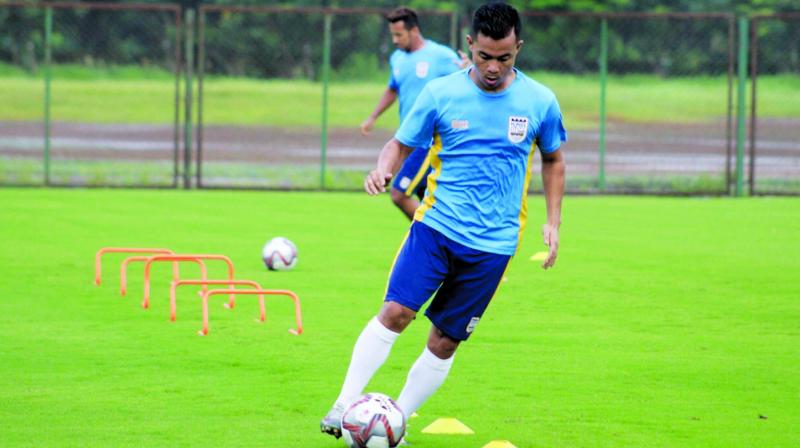 He became the first player to feature for four different ISL teams then.

Ten years ago, he was used to a life that was not regulated according to time. A salary of Rs 15K per month brought Sanju Pradhan to Mumbai in 2008. For a footballer, this sum is fairly absurd but that is what brought an 18-year old Pradhan to the city of dreams.

Playing for former I-league Club Air India FC then, the contract looked sweet as honey to a young lad from Sikkim who wanted to start his footballing journey. He packed his bag and ended up in Mumbai. “Excitement tha toh aa gaya (I was excited, so I came here),” he recalls.

Fortunately for him, the decision turned out to be a positive one. It was a five-year-long stint at Air India after which he was transferred to East Bengal FC in 2014. Surely, the winger’s salary increased in those five years but his move to the football-fanatic-city of Kolkata was what gave Sanju the limelight.

“A lot of people have helped me over this period. When I came to Mumbai, I struggled a lot but there were people who helped me throughout. I carried out my expneses from those 15 thousand. Bimal Ghosh (now coach of Tollygunge Agragami FC) taught me a lot of things. It was a good chance to learn and I think I capitalized on it,” he says.

Completing the circle
After around nine years from when he first entered Mumbai, Indian Super League Franchise, Mumbai City FC last year, roped in Pradhan. He became the first player to feature for four different ISL teams then.

His return was not the best one though. The club suffered a terrible season after finishing at number seven on the points table but despite that fact, Pradhan decided to stay for another season knowing about the signings.

“We know each other really well. One season cannot determine a team. We had a lot of injuries,” as he talks about the coming season. “We have good Indian players and I am confident about them. I have also heard that some new foreign players will join us.

The squad currently has about 20 Indian players in the squad. Most of them are under the age of 25. Pradhan along will be one of the senior lads in the team this year. “All of them have played football at some level. Our aim is to make it to the top four this year and then we can think about the rest,” he says.

Switching positions
It will be wrong to call him old. The age of 28 to 31 is generally considered the peak age of a footballer. At 29, Sanju is in his prime. Last season, then coach, Alexandre Guimaraes tried him out in a different position. Originally a right-winger, he was regularly shifted on wings and on a couple of occasions he was played as a right back as well.

If not at the flanks, he is comfortable about moving to the midfield. “I enjoy playing as the central midfielder role since I can keep the ball and pass it well. If the coach wants me to play somewhere else, I am ready for that as well. It is up to him,” he says.

Sanju is now used to the clamor of the city but for all these years of struggle, he would want a trophy to show. We will know what his fate will be once the season begins on September 29.