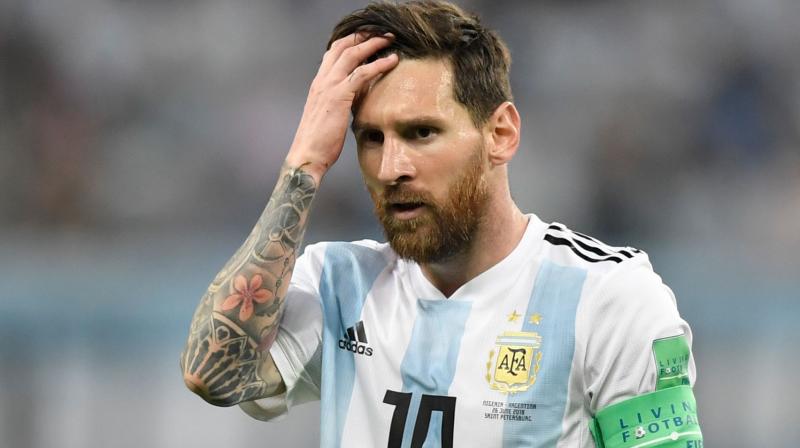 Kazan: Lionel Messi’s Argentina endured a heartbreak on Saturday after they crashed out of the 2018 FIFA World Cup with a narrow 4-3 defeat against France at the Kazan Arena in Kazan.

Antoine Griezmann opened the scoring after Kylian Mbappe won a penalty early on but Angel Di Maria cancelled out his spot-kick just before the half-time break. The latter half added only more drama with five goals on the evening.

Gabriel Mercado gave Argentina the lead but the Les Blues found a way back through Benjamin Pavard. Kylian Mbappe, who caused endless trouble to the opposition then put France in control with a quickfire brace.

Substitute Sergio Aguero headed in injury time to make it 4-3 but it was too late for Messi and co to find a way back.

90 + 4' FULL TIME! What a game of football. Eight yellow cards and seven goals. Lot of drama as Messi and co crash out of the 2018 FIFA World Cup!

90 + 3' GOOOOOOOOOOOAL! Argentina find a way in the middle and it's Messi. He looks up and floats a long ball to Aguero who beats Llloris with a fine header.

90 + 4' There will be four minutes of extra added time. Can Argentina find a way through?

87' SUBSTITUTION Mbappe makes way for Dembele. The PSG star has proved to be a thorn in Argentina's flesh.

86' BLOCKED Banega finds Aguero inside the box. The striker is about to pull the trigger but his shot is blocked!

68' GOOOOOOOOALLLL! Argentina's defence goes from bad to worse. France find a way through the middle again and Giroud takes a deft touch before finding the unmarked Mbappe, who makes no mistake to get his second goal.

64' GOOOOOOOALLLL! Pogba plays Hernandez on the left who pings a cross into the box. Matuidi has his shot blocked before Mbappe takes his chance with a low stride, tucking it past the keeper.

57' GOOOOOOOALLLL! France split the opposition defence and a cross is provided from the left which heads into the box and then to Pavard, who launches a belter from outside the box, leaving the keeper with no chance.

50' YELLOW CARD Banega is the third Argentine player to be booked after a foul on Mbappe.

48' GOOOOOOOALLLLL! Mercado gives Argentina the lead now and the fans are singing again. Di Maria wins a free-kick and his cross is blocked inside the penalty box, falling into the path of Messi. The skipper makes space for a shot, striking with his left foot which deflects into the path of Mercado who is onside.

45' PEEP PEEP! The second half is underway. Just one change as Marcos Rojo is replaced by Fazio for Argentina.

45 + 2' France got carried away after the opener. They were happy to sit back and hit on the counter-attack but now Di Maria's strike has sprung life back into the game. Two minutes of added time before we head into the break.

The first match of the knock-out stages has been lively. Nice. #FRAARG // #WorldCup pic.twitter.com/okjHTbt7mn

43' YELLOW CARD Mascherano makes a late challenge and brings down Kante, for which he is booked.

41' GOOOOOOOOALLLL! Angel Di Maria you beauty! All this while he was not in the game and he comes up with a moment of magic. France find spaces and Banega plays the PSG winger outside the box. He takes a touch, looks up and launches a sublime curler that heads into the right hand top corner. Game on!

37' CLOOOOOSE! Griezmann plays a lovely one-two with Pavard. The Stuttgart defender pings a cross which is inches away from Giroud.

35' BLOCKED! Messi sends a through ball to Pavon on the right whose cross aims to find a partner but is well intercepted.

34' Argentina link-up well inside the opposition half before Messi makes a darting run into the penalty box. He is tackled and no foul given.

32'  Argentina need a change of tactics. Messi has been left isolated so far and the only their wingers have been involved for majority of the part.

31' BLOCKED Griezmann links well with Pogba who finds dangerman Mbappe again. The youngster tries to get the better of Tagliafico but the defender stands tall

27' France break on the counter through Griezmann on the right, who beats Rojo but is off-balance. He tries to carve a way through but can only find Armani.

25' Argentina enjoying possession but have possessed no attacking threat so far.

19' YELLOW CARD Tagliafico is the first man to go into the referee's book after a careless challenge.

18' FREE-KICK FOR FRANCE! Mbappe's pace is proving to be infectious. Pogba plays a sublime long ball over the top to the PSG star who is tripped by Tagliafico just outside the edge of the penalty box. Pogba takes the free-kick this time and blasts the effort over the bar.

9' PENALTY FOR FRANCE! Argentina lose possession before Mbappe picks the loose ball and rushes with speed. He takes a touch and moves to the right before Rojo brings him down.

7' CLOSE! Mascherano brings down Mbappe 25 yards out. Pogba and Griezmann have a small chat before the Atletico forward steps up and curls his effort, only to be denied by the crossbar.

5' POOR CROSS! Banega finds Di Maria on the left and the winger disappoints eventually as his cross is out for a goal-kick.

4' Messi rushes with speed in the opposition half after bamboozling Matuidi. He is brought down by the PSG midfielder and Argentina have another set-piece.

2' Argentina win a free-kick in their own half after Giroud trips Tagliafico.

1' PEEP! The national anthems are over and kick-off is underway at the Kazan Arena.

Lionel Messi’s Argentina will need to hit top gear if they want to continue their journey at the 2018 FIFA World Cup as they lock horns with an exciting France side in the first match of the knockout phase on Saturday.

The match promises to be an exciting contest between two pre-tournament favourites, who have not been at their best so far.

Argentina were held by Iceland and their weakness by exposed in a 3-0 rout by Croatia. The Le Albiceleste qualified through the skin of their teeth with a gritty 2-1 win over Nigeria in their final encounter. France, managed by Didier Deschamps have not looked creative despite the depth of talent in the squad.

They have kept clean sheets in all of their three matches so far and will look forward to denying the opposition any goalscoring chances once again this evening. The onus will once again be on the Les Bleus front trio of Kylian Mbappe, Olivier Giroud and Antoine Griezmann to fire at the top.

Will Messi’s dream come to an end tonight or will Deschamps’s boys fail to prove their potential again?

Line-ups: Here is how both the teams shape up for today

Thoughts on these teams? pic.twitter.com/zrwPqShAj0

The match will take place at the Kazan Arena in Kazan.