Speculation about a move to Real Madrid has bubbled up in previous years only for the Belgian to start a new season with the Londoners. 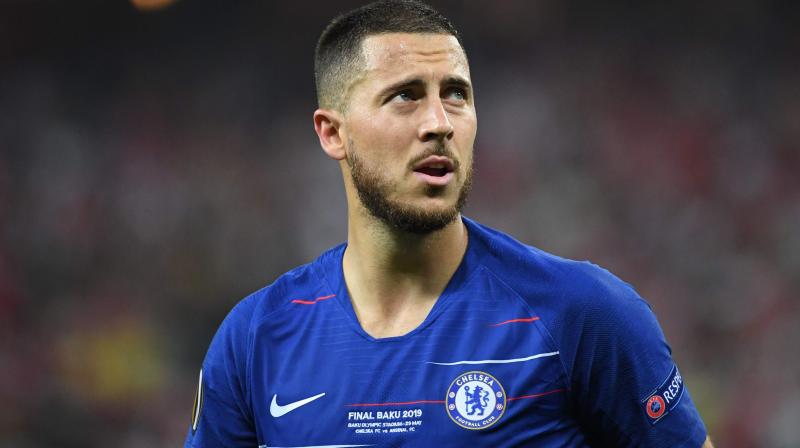 Eden Hazard said after the final whistle in Baku’s Olympic Stadium that he expected to complete his move to Real Madrid soon. (Photo: AFP)

Baku: It took about half an hour for Eden Hazard to find his rhythm in the Europa League final but once he started, Arsenal - like so many opponents of Chelsea over the last seven years - found him impossible to stop.

After a shaky start by the Blues, the Belgian flicked a pass that bemused Arsenal’s defence and left Chelsea’s wing back Emerson in enough space to force a first save of the game from Petr Cech in the 34th minute.

Five minutes later, an incisive ball from Hazard fed Jorginho who cued up Olivier Giroud, only to be denied by another fine Cech save.

Hazard, and Chelsea, had seized the momentum of the match which until that point had seemed it might go Arsenal’s way.

After the break, the winger was simply unstoppable, launching into surging runs, scoring twice — one of which was from the penalty spot — and creating Pedro’s goal which put Chelsea 2-0 up and on their way to the 4-1 victory.

Now Chelsea fans are worrying about who could replace Hazard who has scored 85 Premier League goals for the club since moving to London from Lille in 2012.

He said after the final whistle in Baku’s Olympic Stadium that he expected to complete his move to Real Madrid soon.

Chelsea coach Maurizio Sarri said managing such a talent was not always easy.

Before the final, Sarri said Hazard did wonderful things on the pitch, but clearly got bored in training sessions because he found everything too easy.

One previous Chelsea coach who was less patient was Jose Mourinho. He often criticized Hazard’s defensive work-rate as he tried to push him to be a complete player.

Under Sarri, Hazard has had more freedom to focus his energies in the top half of the field.

This season he was Chelsea’s top scorer with 16 league goals. His 15 assists was the highest in the Premier League.

Chelsea do not lack for other talented wingers.

Spain’s Pedro and Willian of Brazil have shown their worth over several seasons at Stamford Bridge.

But both have now passed 30 and their form dropped off this season, which, combined with Chelsea’s approaching transfer ban, means a lot will be riding on American striker Christian Pulisic after his pending move from Borussia Dortmund.

Of course, Hazard may yet remain in west London.

Speculation about a move to Real Madrid has bubbled up in previous years only for the Belgian to start a new season with the Londoners.

But this time, the move seems highly likely as Hazard himself confirmed in the small hours of Thursday as his teammates celebrated their Europa League victory around him.

“My dream was to play in the Premier League and I did it for seven years,” he said.

“Maybe I think it is time to say goodbye.”