When Ernesto Valverde took charge at the start of last season, Barcelona were wounded by consecutive Super Cup defeats to Real Madrid. 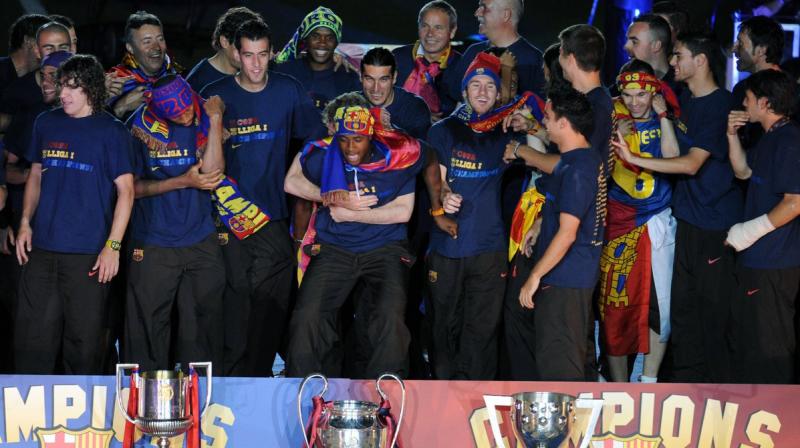 It was ten years ago Alex Ferguson dubbed them the best team he had ever faced but those left from Barcelona's iconic generation still have work to do. Three remain and when Lionel Messi, Sergio Busquets and Gerard Pique line up against Liverpool on Wednesday, they may wonder if this could be their best chance of another, and perhaps final, Champions League triumph. (Photo: Uefa champions league/ Twitter))

Barcelona: It was ten years ago Alex Ferguson dubbed them the best team he had ever faced but those left from Barcelona's iconic generation still have work to do.

Three remain and when Lionel Messi, Sergio Busquets and Gerard Pique line up against Liverpool on Wednesday, they may wonder if this could be their best chance of another, and perhaps final, Champions League triumph.

Pep Guardiola's mesmeric side had just danced around and dizzied Manchester United in 2009, their 2-0 victory completing an historic treble, when Ferguson conceded: "Nobody has given us a hiding like that."

But not long after the final whistle at Wembley, Ferguson expressed doubts too, about the longevity of that Barca group and then, whether they could ever be replaced.

"Great teams go in cycles and the cycle they're in at the moment is the best in Europe," he said.

"How long it lasts and whether they can replace that team...they have the philosophy but it's difficult to say if you can find players like Xavi, (Andres) Iniesta and Messi all the time. Probably not."

Xavi and Iniesta have gone, succeeded by the all-encompassing Ivan Rakitic and, more recently, Arthur Melo, who could mature into the kind of player his predecessors would admire.

Messi, who turns 32 in June, Busquets, who will be 31 in July, and Pique, already 32, have hung on, driving the club through fresh cycles of success.

But in some ways perhaps, Ferguson was right. They could never sustain the Guardiola method in full, in part because pressing began to neutralise possession but mainly because that group of players was unique.

In the Champions League, glory came again quickly in 2011, United again the victims, but from 2012 to 2018, it followed only once more, after beating Juventus in 2015.

When Barcelona outplayed United in 2009, they had already won La Liga, the first of eight league titles in 11 years, the last of those confirmed by victory over Levante on Saturday, when Messi scored the winner.

"Our objective now is the treble," said president Josep Bartomeu.

He knows domestic dominance has been tarnished by underachievement in Europe and, regardless of whether they win another double this term, this team's season will be defined by them beating Liverpool, and then either Tottenham or Ajax on June 1.

Messi, Busquets and Pique have played in 34 Champions League semi-finals matches between them and while the likelihood is there will be more to come, nothing is guaranteed. If the next takes as long to arrive as this one, Messi will be almost 36.

When Ernesto Valverde took charge at the start of last season, Barcelona were wounded by consecutive Super Cup defeats to Real Madrid.

"For the first time I feel inferior to them," said Pique.

Now they sit 18 points ahead of them in the league, having finished 17 clear of them last season. But inferiority in Europe still rankles. It is Madrid's name on the cup next to four of the last five years.

And for the remnants of one of Barcelona's most symbolic eras, time is running out to put it right.

"I hope I can be part of the new wave," Lenglet told AFP Sport in February.

"There is a regeneration of the squad that is preparing for the future and I hope to be a part of that."

Frenkie de Jong could face Barcelona in the final in Madrid, in what would be his last Ajax appearance before joining the Catalans in July. He may not replace Busquets but the 21-year-old will, at the very least, challenge him.

Pique has been one of his team's standout players in central defence but there are plans there too. The 19-year-old Jean-Clair Todibo arrived from Toulouse in January and Matthijs de Ligt could follow De Jong from Ajax in the summer.

As for Messi, there may never be a successor but four Champions League titles, one fewer than Cristiano Ronaldo, means there is a sense hanging over the club of a record unfinished.

In that way, Liverpool could encounter the same problem Manchester United did a decade ago. "We never got control of Messi," Ferguson said. "But a lot of people will end up saying that."