The grassroots level programme will get underway from Monday in eight cities including seven centres in Mumbai and two in Pune. 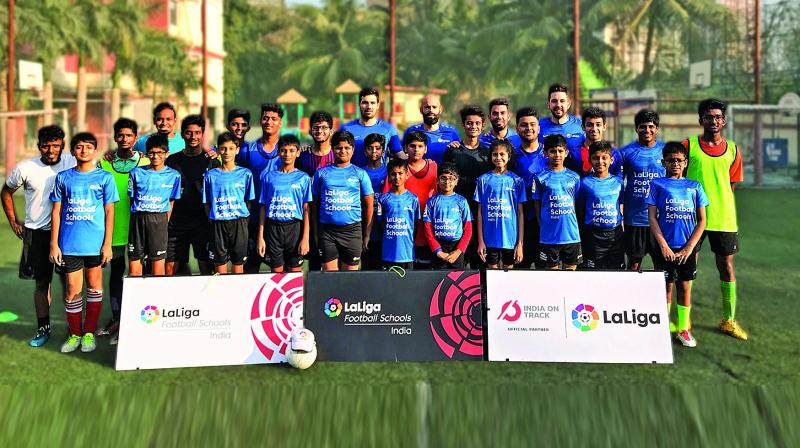 Track (IOT) will be providing comprehensive training to Indian children and coaches.

Mumbai and Pune will be among eight other cities across India where LaLiga Football Schools will be holding summer camps for three months in various centres. A grassroots development initiative by the Spanish football league LaLiga along with India On

Track (IOT) will be providing comprehensive training to Indian children and coaches.

La Liga will be the first international football league to start a grassroots level programme in the country from April 1 to June 30. LaLiga Football Schools will be hosting special training camps for students in eight cities in India, namely Mumbai, Delhi-NCR, Bengaluru, Kochi, Calicut, Thrissur, Pune and Surat.

As of now, there are seven centres in the city where the interested people can enroll. Smt. Sulochanadevi Singhania School, Seven Square Academy and EuroSchool are exclusively for students, while Ryan Global School (Dreamsports Fields), Turf Park (St. Andrew's Astro Turf), Ritambhara College (Om ASTRO Turf) and Ryan International School ICSE are open to all. Pune has two centres at Turf Up and Green Field’s Arena (Turf Park).

Following the training provided at LaLiga Football Schools based on Spanish style football, the camps will be delivered using LaLiga’s technical curriculum and detailed methodology, overseen by Javier Cabrera, the programme technical director in India. Ranging from six to 12 days, the aim of the summer camps is to popularise football amongst the youth in India.

Parents can get information on the camps at Facebook events links.

LaLiga Football Schools is  one of its kind initiative that allows students between five to 18 years of age to explore their love for the game and subsequently nurture the football environment in India. Since its launch, over 10,000 kids in 35 centres across 14 cities in India have participated in the programme.

To ensure long-lasting impact, LaLiga will also organize a ‘Train the Trainer’ programme in New Delhi from April 13-15 where 48 Indian coaches will been trained by the Technical Director and UEFA Pro-Licensed coaches assigned by LaLiga along with Hugo Blanco – Sports Projects Director.

The programme is first of its kind which is designed to adapt the LaLiga training methodology to the needs of the young Indian footballers. Additionally, the training programme also focuses on individual growth by educating the children about values of football and sports.

Jose Antonio Cachaza, Managing Director, LaLiga India said, “Over the past six months, through LaLiga Football Schools, we have reached thousands of young students across the country and the potential here is incredible. Recognising this, we decided to start summer camps to make our training programmes more accessible to the young Indians. The intensive courses delivering the Spanish methodology and approach towards football will take them one step closer towards their football dreams,” he said.

“The passion for football is there for all to see in India. Since I’ve been in this country, I continue to be surprised by the millions playing this sport. Spanish football is renowned across the globe for footballing excellence in professional and youth levels, so these camps give opportunity to play football the LaLiga way,” Javier Cabrera, Technical Director, LaLiga Football Schools India said.