The 26-year-old Brazilian has emerged as one of the unsung heroes of Klopp's team. 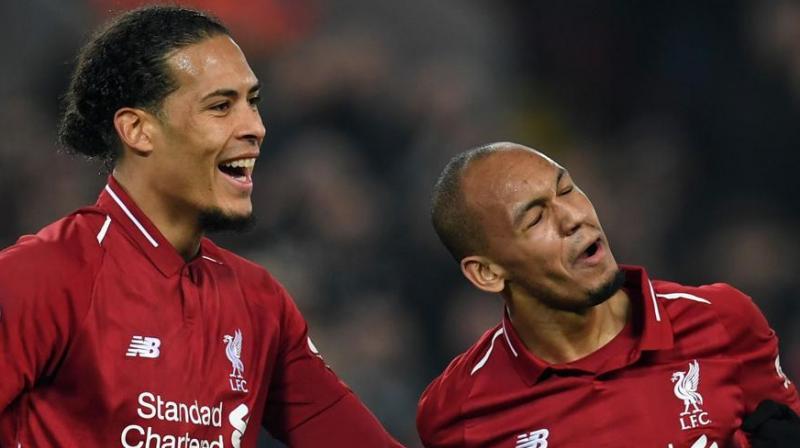 Juergen Klopp is preparing to embark on a frantic run of fixtures with fears over the fitness of Fabinho after the midfielder limped out of Liverpool's Champions League draw against Napoli. (Photo:AFP)

Liverpool: Juergen Klopp is preparing to embark on a frantic run of fixtures with fears over the fitness of Fabinho after the midfielder limped out of Liverpool's Champions League draw against Napoli.

The 26-year-old Brazilian has emerged as one of the unsung heroes of Klopp's team, who have a comfortable eight-point lead at the top of the Premier League.

Fabinho suffered an ankle injury during Wednesday's 1-1 Champions League draw with Napoli, a result that leaves the reigning champions needing a point from their final group game at Salzburg to guarantee progress.

Klopp had been looking for a victory against the Italians, to ensure that at least one of his fixtures during this chaotic run could be treated as a dead rubber.

But the Liverpool manager was left with graver concerns when Fabinho limped off early.

Fellow midfielder Georginio Wijnaldum said an injury to Fabinho, signed from Monaco in July 2018, would be a "big blow", with Liverpool involved in four competitions in December.

But he added: "We just have to show that it doesn't affect us. During the years we have had some difficult injuries and difficult positions (like) last season when we didn't have a right defender, we just have to deal with it so we will see."

Fabinho has emerged as a crucial player at Anfield, filling a sitting midfield role that had previously been the preserve of Jordan Henderson.

He took his time to settle, with critics questioning the wisdom of Klopp's decision to bring him to Anfield.

But, once accustomed to the demands of the English game, Fabinho quickly became an integral part of a Liverpool side that would lose just one league match, to champions Manchester City in January, over the entire campaign.

Significantly, perhaps, Fabinho did not start that game, coming on as a second-half substitute. Liverpool have not lost a league game in which their midfield lynchpin has started since he arrived at the club nearly 18 months ago.

Klopp was still not offering any diagnosis of the injury on Thursday, with reports suggesting medics were waiting for the swelling in Fabinho's ankle to die down before conducting thorough tests on Friday.

In any case, Fabinho was always due to miss Saturday's Brighton game at Anfield through suspension, having picked up five bookings to earn a one-match ban, but with the prospect of a longer lay-off, Klopp will have to make contingency plans.

Fabinho's absence will be felt as much psychologically as in pure football terms, with the player bringing graft and endeavour to the side.

His covering role in front of the back four has freed other midfielders, notably Henderson, to play more offensive roles and while teammate and central defender Virgil van Dijk has rightly earned plaudits for his impressive form, Fabinho's performances have clearly helped.

Klopp must decide whether he returns Henderson to the Fabinho role or switches Dutch international Wijnaldum from a wide position to the central spot.