Antoine Griezmann gearing up to face his former club

The French striker was Atletico’s top scorer and talisman for five years. 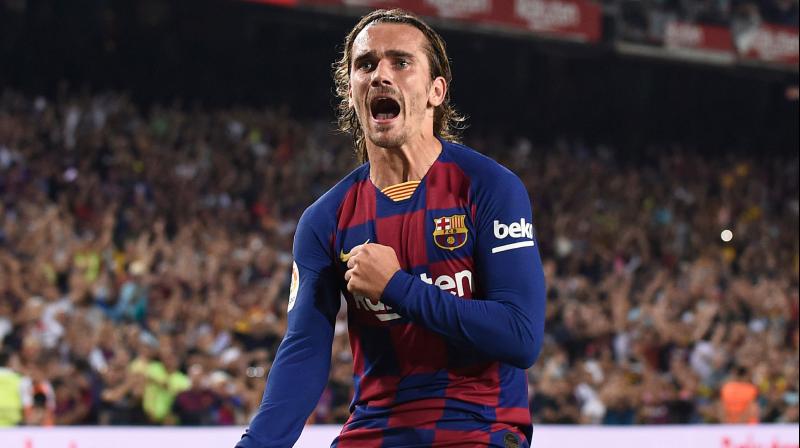 Antoine Griezmann has had a tough start to life at Barcelona but is finally showing signs of settling in as he prepares for Sunday’s crunch clash at title rivals Atletico Madrid, his first game back at his old club since a bitter split. (Photo: AFP)

Barcelona: Antoine Griezmann has had a tough start to life at Barcelona but is finally showing signs of settling in as he prepares for Sunday’s crunch clash at title rivals Atletico Madrid, his first game back at his old club since a bitter split.

The French striker was Atletico’s top scorer and talisman for five years and appeared to show his loyalty to the club when he rejected a tempting offer to join Barca in 2018 and pledged his future to the Madrid side in a televised documentary.

But a year later he joined Barca for 120 million euros ($132 million), prompting a legal complaint from Atletico after it emerged the Catalans had negotiated with Griezmann without their permission, leading to club being fined a paltry 300 euros.

Griezmann might have been wondering if the move had been worth it as he has faced constant criticism for a slow start at the Camp Nou, scoring five times in 17 appearances.

He started on the bench in Wednesday’s Champions League match with Borussia Dortmund but an injury to Ousmane Dembele presented him with a chance which he duly took.

Griezmann dovetailed with strike partners Luis Suarez and Lionel Messi in a flowing attacking display and provided a superb finish to a pass from Messi to round off a 3-1 win and end a run of six games without scoring.

The Frenchman’s lack of chemistry with the two South Americans has been a big talking point but the trio are starting to click.

“A lot has been said about the connection, especially when one of them doesn’t score, but the best players always end up understanding each other,” said Barca coach Ernesto Valverde after beating Dortmund.

“Luis and Leo understand each other perfectly because they have been playing together for a long time, and with time the three of them will learn to gel even better with each other.”

Barca top La Liga on 28 points and have a game in hand on Atletico, who are fourth on 25 and in a dire run of form, winning once in their last six games in all competitions.

Real Madrid are second on 28 points and can go clear at the top for at least a day when they visit Alaves on Saturday in the middle of a resurgent run of five wins in seven games, in which they have scored 21 goals.