The Brazilian side were without their talisman Vinicius Junior, who will join them on Saturday. 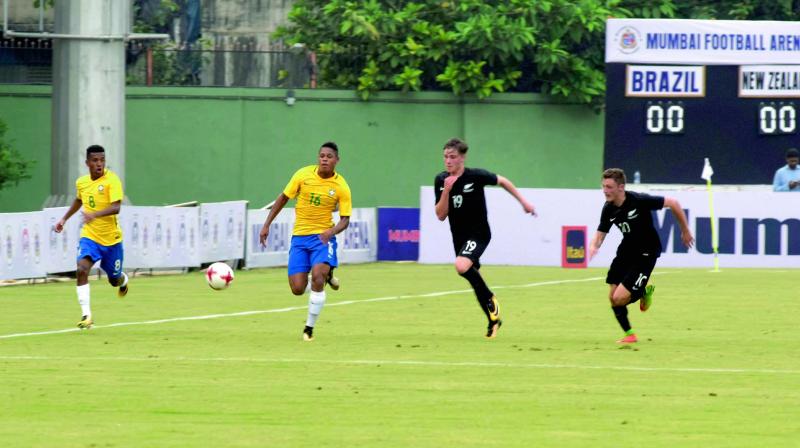 Brazil and New Zealand players at a practice match in Mumbai on Thursday, ahead of the Fifa U-17 World Cup that gets under way on October 6. (Photo: Shripad Naik)

Mumbai: The Samba Boys triumphed over the Kiwi side 2-1, with a fine brace from forward Brenner in a practice match at the Mumbai Football Arena on Thursday, ahead of the Fifa Under-17 World Cup. New Zealand skipper Max Mata grabbed a consolation goal in the dying stages of the game from a spot-kick.

The Brazilian side were without their talisman Vinicius Junior, who will join them on Saturday.

The Samba boys were caught napping early on as the Kiwis came close to scoring. Striker Charles Spragg was in an enviable position, but missed the opportunity. Later in the half, Brazil’s Marcos Antonio had a shot from outside the box but it went over the bar.

Brenner too let go of a chance in the first half with a free-kick but Kiwi goalkeeper Jacob Clark pulled off a save to deny the Samba boys from racing into the lead.

In the second half, the Brazilians unleashed their main players who were rested initially to escape burn out, according to Brazilian coach Carlos Amadeu. Brenner got the scoreboard moving a few minutes into the second half, with a powerful left-foot finish in the bottom corner. The men in yellow and blue kept troubling the Kiwi defence which led to another goal by Brenner with a near post right-foot finish.

The Brazilians dominated until the last few minutes, when Mata was brought down by Lucas Halter in the penalty area giving away a spot-kick. The Kiwi captain stepped up to the occasion with a calm finish.

Although Brazil had won, there was a penalty shootout to allow the players to practice before real competition begins October 6.

New Zealand coach Danny Hay praised the Brazilian side. “The exposure that our country gets when it comes to football is too less. Brazil are a world class side, they have players who will make it to the big level,” said Hay.