Ruben Gimenez hit the crossbar from range shortly afterwards and Naveen used a solid left hand to keep out Soni, and it remained 1-0. 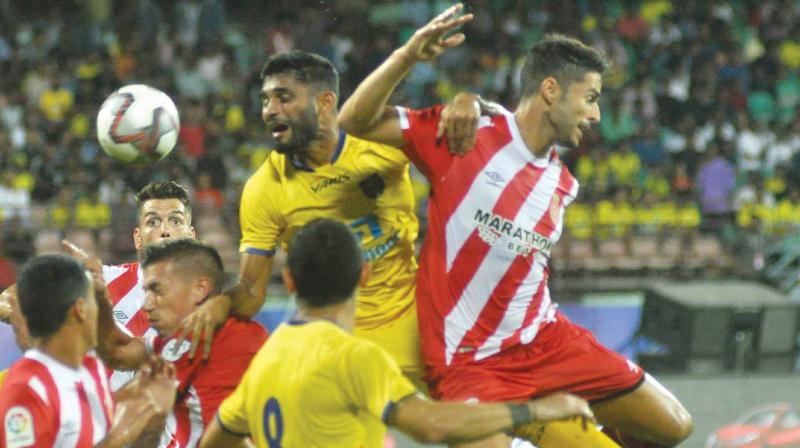 Kochi: There are two ways to approach a game a football, one is with the obvious intention to win it and other with a hope of not losing. Kerala Blasters chose the second option and even though they failed eventually it could be argued their ambition of avoiding a catastrophe had been served.

Kerala losing to Girona had not come as a surprise but the scoreline of 5-0 that included a 90th minute penalty was way off an outcome that was anticipated. That was because their superior opposition from the La Liga had drubbed Melbourne City 6-0, the same score by which the Australian club had conquered them a few days ago, projecting a massacre on Saturday.

With consecutive wins that had 11 goals scored without conceding even once, Girona wrapped up their splendid pre-season tour and the trophy of the Toyota Yaris La Liga World football tournament that came along.

Going into the final game of the three-game tournament, Girona had retained just three players – midfielders Pere Pons and Alex Granell and centre-back Juan Pedro - from their starting XI against Melbourne. However, the Blasters, yet again, rolled out some of their best picks available. Naveen Kumar on his debut, replacing Dheeraj Singh and Mohamad Rakip tuck in on the left of a five-man defence were some of the notable changes.

The visitors had remained loyal to their philosophy, of building slowly from the back and spreading wide with the intention of making crosses. It had worked so well against the Blues’ enterprising style that had enough pockets for Girona wide-men to occupy, though not much against Kerala’s deep-lying defense, this time with Jhingan occupying a central role with Cyril Kali on his left and Anas Edathodika on the other.

The Kerala machinery was designed to soak up pressure, of getting a headed clearance to anything aerial and a sliding tackle or a wild swing forward. It simply didn’t aspire to work the ball to the other end of the pitch.

After surviving the scrutiny for over forty minutes, the hosts were left in their wake with Girona improvising a bit. Naveen, who had just moments before applied a smart low save to deny Pedro Porro stood dumbstruck as an onrushing Eric Montes fired it past him.

The shot on the run from an acute angle after being allowed an overlap with a precision ball from Pedro Porro had all the elements of a well-executed training exercise.

Ruben Gimenez hit the crossbar from range shortly afterwards and Naveen used a solid left hand to keep out Soni, and it remained 1-0.