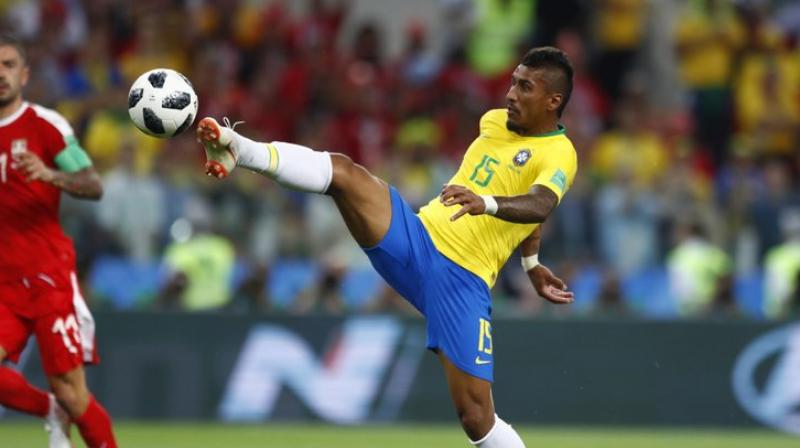 Paulinho scores Brazil’s first goal during their Group E match against Serbia at the Spartak Stadium in Moscow. (Photo: AP)

Moscow: A defensive midfielder and a defender scored a goal apiece as Brazil eased past Serbia and into the Round of 16 here on Wednesday.

The five-time champions, who are looking good to add one more here, will face Mexico in Samara on Monday for a place in the quarter-finals.

All eyes at the Spartak Stadium were on Neymar and Philippe Coutinho but Paulinho popped up from nowhere to put Brazil ahead with a fine goal in the 36th minute. Coutinho, easily the most effective player for the Selecao here, was the creator with a superb lofted pass from the middle. Paulinho’s finish was accomplished as he allowed the ball to bounce before pouncing on it with a poke past the Serbian goalie.

Brazil coach Tite must be worried over Gabriel Jesus’ Russian drought. The Manchester City forward wasted the half’s best chance when he dawdled after getting an exquisite through ball from Neymar on the left. Goals are like oxygen for strikers; Jesus has been gasping for breath here. Does Jesus also need divine intervention to find his scoring boots?

For all the noise of their raucous supporters, Serbia were surprisingly flat in the first half. Forward Aleksandar Mitrovic, whose heroics earned Fulham promotion to the Premier League in May, remained anonymous as he never got useful supply. For Brazil, there was nothing alarming except left-back Marcelo’s injury after a fall. Filipe Luis who replaced Marcelo was fantastic throughout and Tite need not fret over the Real Madrid defender’s fitness for the next match.

Serbia were a transformed side after the break. Aware that only a win would guarantee an extended stay in Russia, they put Brazil under tremendous pressure for a spell of about 15 minutes. But a goal, which they deserved, never arrived. Mitrovic was guilty of missing two sharp chances. He directed a header inside the six-yard box on to the foot of centre-half Thiago Silva after Brazilian goalie Alisson had flapped at a right-wing cross before wasting another chance with a weak header.

Against a team of Brazil’s calibre, chances must be taken. In the end, Serbia’s profligacy left them ruing what might have been. Serbia were not able to impose themselves in midfield, where Brazil’s holding player Casemiro was immense. Although they used the width of the pitch really well, productive crosses were at a premium.

Coutinho initiated a move that even outshone his assist for Paulinho’s goal with a touch from the sole of his boot in Brazil’s half. He stormed into the Serbian half to get the return pass before finding the overlapping Neymar on the other wing. Neymar should have found the back of the net but he could only crash a shot against goalie Vladimir Stojkovic, Serbia’s best player of the night as he made a string of fines saves. Silva put the match to bed by nodding in Neymar’s corner in the 68th minute at the near post. Although Neymar is not at his sharpest in front of goal, Brazil can approach the knockout stage in a confident mood because they appear to be peaking at the right time.