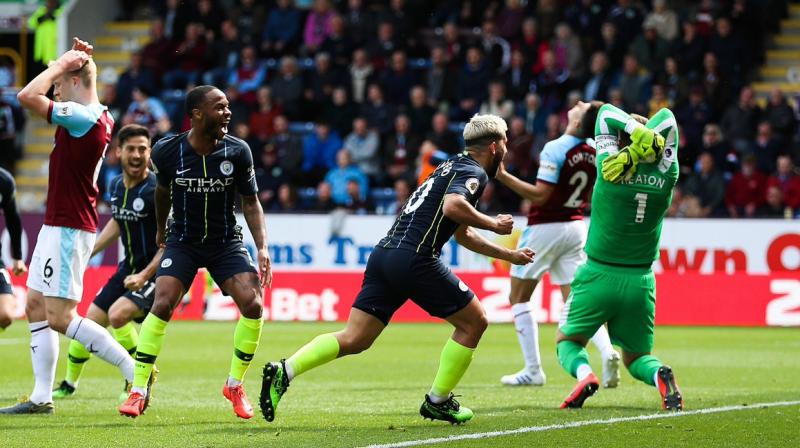 Pep Guardiola’s side now need to win their final matches at home to Leicester City and away to Brighton and Hove Albion to retain the title and break the hearts of second-placed Liverpool who have tracked them all the way. (Photo: Manchester City Twitter)

It was nervy and scrappy but a 1-0 win at Burnley on Sunday was enough to return Manchester City to the top of the Premier League and keep them on track for back-to-back titles.

Pep Guardiola’s side now need to win their final matches at home to Leicester City and away to Brighton and Hove Albion to retain the title and break the hearts of second-placed Liverpool who have tracked them all the way.

The victory was the 12th win in a row for City, who have shown no signs of giving Juergen Klopp’s Liverpool, who have lost just once all campaign, the slightest opening.

Yet the afternoon did provide some encouragement for those in Merseyside following the match, with City frustrated until the second half when they broke through with an uncharacteristically scrappy goal.

Aguero’s shot was chested out and cleared by Matt Lowton on the goalline but technology ruled the effort had crossed — a minor compensation for Guardiola after a VAR video review had led to his team’s elimination from the Champions League.

It was an unusual sight to see Guardiola take off two forwards in the latter stages and replace them with central defenders and while the City boss joked that he was “trembling” at the end, his counterpart Sean Dyche claimed the Spaniard had been yelling for his team to get the ball in the corner.

City had enough possession and chances to have put the game to bed well before the tense final minutes, but even if Burnley created very little attacking threat, Guardiola was leaving nothing to chance.

“In the first half we didn’t create too much but of course it is what it is,” said Guardiola, who pointed the finger at a dry pitch and what he viewed as long grass for his side lacking their usual slickness.

“Ninety-two points is incredible - it is in our hands, we must win our next two games and our next one against Leicester.”

“We didn’t concede one shot on target or one corner, we are a small team but we are smart, in the first half the pitch was so dry and it was slow but in the second half we knew we had to score our goal.

“In the last minutes anything can happen, always it is difficult if you cannot close the game,” he said.

The visitors struggled to get into their usual rhythm in the first half but came out strongly after the break and Burnley keeper Tom Heaton did well to keep out a fierce blast from Sergio Aguero at the near post.

Burnley were fortunate to escape a penalty appeal when a drive from Bernardo Silva appeared to strike the arm of Burnley’s Ashley Barnes.

Heaton did well to keep out another fierce drive, this time from Bernardo Silva, before City finally took the lead.

Raheem Sterling went close to a second but Burnley defender Ben Mee produced a wonderful goalline clearance to keep the Clarets in the game.

Burnley, however, pushed hard at the end with Guardiola bringing on John Stones and Nicolas Otamendi as City held firm to claim the three points.

“It’s fantastic for me to see Pep screaming ‘Get the ball in corner’ - that was pleasing for me... that’s quite amusing,” said Dyche.

Yet the biggest smile at the end of the game belonged to Aguero, City’s record scorer, who set another milestone with his latest goal.

The Argentine became only the second player to score 20 goals or more in six different Premier League seasons.

Only Alan Shearer, who managed seven seasons, has done it more often, and only Thierry Henry can match Aguero’s record of scoring 20 or more in five consecutive campaigns.