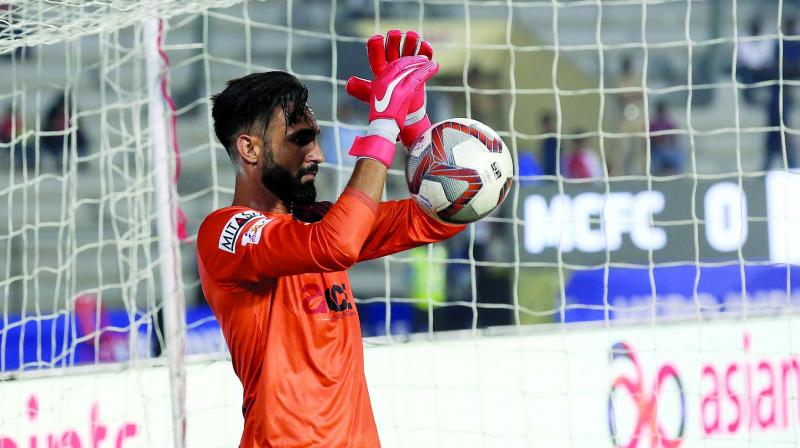 Coming on the back of a good season in the ISL, Mumbai City goalkeeper Amrinder Singh believes that the Islanders are ‘hungry’ for success in the Hero Super Cup. He believes that the experience of Head Coach Jorge Costa, who led FC Porto to UEFA Champions League title in 2004, will bail them through.

“Our team has improved a lot after coach Jorge Costa took over at the start of the season. He was a big player back during his days, and he has the experience of playing and managing big games like in the UEFA Champions League. Under him, the team feels like a family,” Amrinder told the AIFF website.

Mumbai City start their Super Cup campaign  in the prequarters against Chennaiyin FC at the Kalinga Stadium of Bhubaneswar on Friday. The Islanders finished third in the ISL standings before losing to FC Goa 5-2 on aggregate across two legs in the semi-final. However, they came back strongly from 5-1 loss at home to break Goa jinx with away 1-0 win and bow out of the ISL-5 on a high.

Chennaiyin in contrast had forgettable season as they failed to defend their title and finished at the bottom of the ten-team league. However, Chennaiyin beat Colombo FC 1-0 on aggregate in the AFC Cup Playoff qualifiers to get some boost. They had walkover in the Super Cup qualifier after Aizawl withdrew from the game.

Chennaiyin manager John Gregory will be leaving the club after the season and would be aiming to sign off with a decent performance at the Super Cup and the AFC Cup.

Mumbai City had let in only 20 goals in 18 matches in the League stages that included seven goals by Goa in two fixtures. While goalkeeper Amrinder Singh had played a crucial role to give Costa’s side a top-three finish, the India International believes that the entire back-four, led by captain Lucian Goian, has worked together to make this a reality.

“Lucian has been in the side for three years now. He understands the needs of the players in the dressing room. It’s very easy to communicate with him on the pitch, so we have a good understanding and can thwart attacks easily,” Amrinder said.

The Romanian fits seamlessly into a back-four with three Indian defenders due to Goian’s massive interest in Indian culture, and languages that has helped the defense communicate amongst each other.

“He is so much invested in the Indian culture now that he has started to pick up the language quite often. That helps a lot when we are in clutch situations on the pitch,” said Amrinder. “He hangs out with me a lot off the field. So he has picked the Punjabi language through the songs. It was a huge surprise for me when I first saw him singing along to a Punjabi song.”

It is not just Punjabi that the Romanian has picked up. Videos of Goian singing the National Anthem have gone viral this season. “At the end of last season Goian promised me that he would sing the Indian National Anthem on the pitch one day, and he did it,” Amrinder said. “It didn’t take him long. He kept his promise.”

The goalkeeper also went on to mention about the contribution of the three Indian defenders — Anwar Ali (Sr), Subhasish Bose and Souvik Chakraborty playing a massive role along with the Romanian.