India’s midfielders were mindful to not to provide space to the opposition and fell back consistently to provide support to the defence. 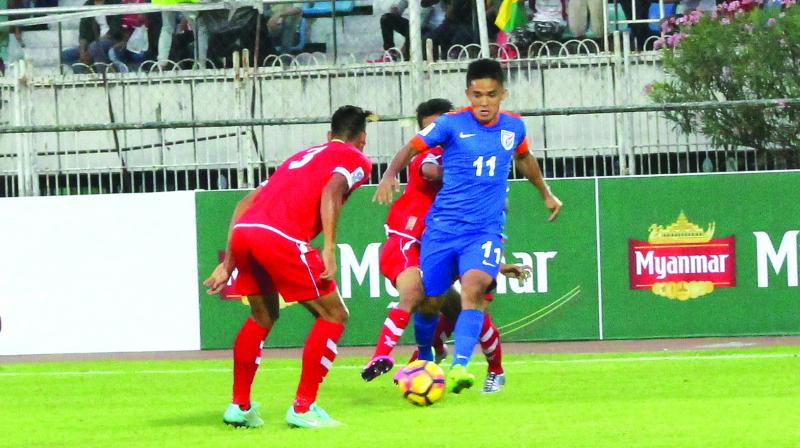 Sunil Chhetri (right) in action against Myanmar in their AFC Asian Cup qualifiers in Yangon on Tuesday. India won 1-0 on Chherti’s late goal.

Chhetri turned in the industrious Udanta Singh’s accurate pass from inside the box to deal a heavy blow to the hosts. It was his 53rd international goal.

India began cautiously, trying to control possession though Myanmar, ranked 172nd, could have taken the early lead, but were denied by debutant Anas Edathodika who kept Kyaw Ko Ko at bay.

Chhetri, named by the captain for the match, was lively at the other end but was kept quiet in the first half. India’s midfielders were mindful to not to provide space to the opposition and fell back consistently to provide support to the defence.

Myanmar threatened on 15 minutes when Thein Than Win and Si Thu Aung combined on the left flank but Edathodika was again well positioned to snuff out the danger.

Stephen Constantine’s boys responded with their own opportunity in the 20th minute when Jackichand Singh outran the Myanmar defence to cross from the right flank but Robin Singh mistimed his jump.

Myanmar should have gone ahead moments later but Aung Thu missed a simple tap-in before an open net. The Indians were similarly guilty of spurning a golden chance on the half-hour mark when Jackichand blasted over from close range.

India’s appeals for a penalty, at the stroke of half time when Chhetri was brought down inside the area by a hard tackle, were not entertained by the referee.

Myanmar began with greater initiative after the break. They troubled the Indian defence with their pacy wingers on both flanks.

India were pinmed to their territory for the greater part of the second half and were again disappointed when Udanta’s appeal for a penalty, in the 70th minute, were rejected.

With 10 minutes left on the clock, India sensed an opportunity against their tiring opponents, trying to build quick counter-attacks.

The ploy worked as Udanta’s sudden burst of pace left Myanmar chasing shadows. His accurate pass was confidently converted by Chhteri to silence the 20,000-strong crowd.

Constantine lauded the team’s resilience after the victory but warned they were a long way from qualifying for the finals.

“Myanmar had several chances to score, but we showed tremendous spirit on the field today. We never gave up mentally and that aided us in our win,” he said after the match.

“We had three to four chances in the match, but we could only take the one in the end. It was a very tight game and boys showed fantastic spirit to earn the win.”

“It was a huge game for us. Myanmar at home are always difficult to play,” said Chhetri.

India host the Kyrgyz Republic on June 13 in their next qualifier before taking on Lebanon in an international friendly on June 7.