League leaders Minerva made no changes to their team. 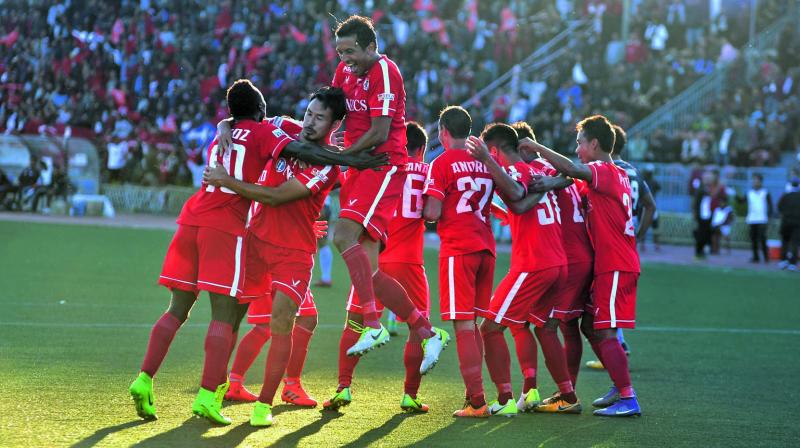 Aizawl FC players celebrate their 2-1 win over Minerva Punjab in their I-League match in Aizawl on Wednesday.

Kareem Omolaja (72nd minute) and Andrei Ionescu (85th) scored for the hosts while Girik Khosla (90+5 minutes) reduced the margin for Minerva, who stayed at 13 points after six matches.

Aizawl are sixth with seven points from four games.

The home side made four changes to their first eleven as David Lalrinmuana, Andrei Ionescu, William Lalnunfela and newly-recruited Laldinliana started the game in place of Lalrinzuala, K Lalthathanga, Yugo Kobayashi and Lalbiakthanga.

David and Ionescu, alongside captain Alfred Jaryan, manned the midfield and William Lalnunfela played the lone striker upfront and Leonce Dodoz and Lalmuankima flanked from opposite sides of the pitch.

League leaders Minerva made no changes to their team.

Leonce Dodoz was lively on the right side. The home side dominated the ball possession but could not carve out ant clear-cut scoring chance.

Minerva looked up to William Opoku tp provide inspiration up front but lacked support from Chencho.

Aizawl put the ball on the back of the net through Saighani in the 21st minute but it was ruled out owing to a foul, much to the dismay of the vociferous Aizawl supporters.

Aizawl continued to dominate the flow of action but needed a long time to open the deadlock.

Minerva’s coach Khogen Singh introduced Moinuddin, who scored the equaliser against Mohun Bagan, towards the end of the game but the home side struck again to dash Minerva’s hopes.