Icardi scored twice in the first 26 minutes and Mbappe, on his return to the starting line-up added a brace of his own before the interval. 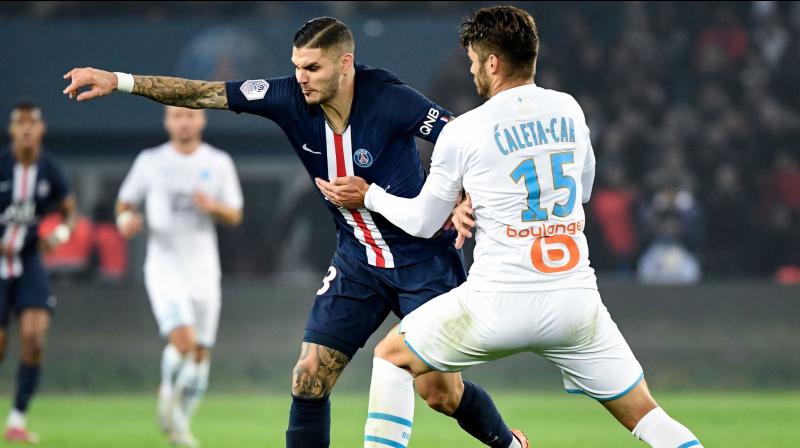 Mauro Icardi and Kylian Mbappe both scored twice as Paris Saint-Germain demolished their old rivals Marseille 4-0 on Sunday in a game that further laid bare the gulf that exists between the sides and allowed the reigning champions to extend their lead at the top of Ligue 1. (Photo:AFP)

Paris: Mauro Icardi and Kylian Mbappe both scored twice as Paris Saint-Germain demolished their old rivals Marseille 4-0 on Sunday in a game that further laid bare the gulf that exists between the sides and allowed the reigning champions to extend their lead at the top of Ligue 1.

Icardi scored twice in the first 26 minutes at the Parc des Princes and Mbappe, on his return to the starting line-up after a recent struggle with injury, added a brace of his own before the interval against Andre Villas-Boas's hapless visitors in the 'Classique'.

Mbappe, scorer of a hat-trick in the 5-0 win at Club Brugge in the Champions League in midweek, has six in his last three matches -- he scored a hat-trick as a substitute in Belgium before starting here for the first time in two months.

PSG are eight points clear already at the top of Ligue 1, with this win coming after second-placed Nantes lost 1-0 at home to Monaco on Friday.

Another league title already looks inevitable, with Thomas Tuchel's team once more far too strong for one of the clubs seen as their most likely challengers at the beginning of the campaign.

PSG were again without the injured Neymar here, while Idrissa Gueye -- their most impressive midfielder this season -- was also sidelined, but neither was missed.

There remains much hype around this fixture in France as it brings together the country's two best-supported clubs, yet it is a long time since Marseille have been a match for their rivals from the capital.

For a period in the 1990s, the two sides were fighting it out with one another at the top of the table. Now, with PSG transformed into the dominant force in Ligue 1 since the Qatari takeover of the club in 2011, Marseille cannot compete on or off the field.

They have not beaten PSG since November 2011, with American owner Frank McCourt in attendance here to see their winless run in the intervening period stretch to 20 matches.

This game may have been very different had Valere Germain found the net rather than fire wide from Dimitri Payet's ball into the box in the 10th minute. Instead, PSG went straight up to the other end of the field and seized the lead.

Angel Di Maria crossed for Icardi, whose header was saved by Steve Mandanda. However, Icardi was on hand to convert the rebound.

Icardi was then denied by Mandanda after Mbappe set up the Argentine with a brilliant flick, but he snatched his second of the night on 26 minutes, getting to Marco Verratti's ball into the box before Mandanda and nodding in.

PSG then began to toy with their visitors and got their third of the evening just after the half-hour as Verratti's pass sprung the offside trap and found Di Maria, who squared for Mbappe to tap in.

Di Maria has been in outstanding form recently and got his second assist of this game with a stunning outside-of-the-boot pass to release Mbappe to make it 4-0 at the end of a mesmerising team move.

Marseille at least stemmed the flow in the second half, preventing PSG from adding any further goals and thereby avoiding greater humiliation. They remain seventh, just two points adrift of the top three.

In Sunday's other matches, Rennes ended a run of 10 games without a win by beating Toulouse 3-2 in Brittany, 18-year-old Yann Gboho coming off the bench to score a stoppage-time winner.

Saint-Etienne remain unbeaten since Claude Puel's arrival as coach after recovering to draw 2-2 at home with Amiens.