Fifa U-17 World Cup: India colts get down to business

After the USA game, India play Colombia on October 9 and then Ghana on October 12 at the Nehru Stadium here. 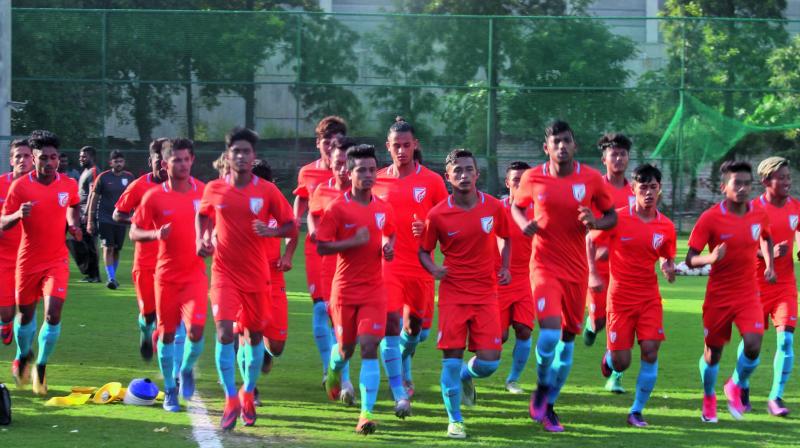 India’s Under-17 World Cup squad at a training session at the Conscient Football ground in Gurugram on Wednesday. The hosts take on USA in their opening match in New Delhi on October 6.

New Delhi: Team India hit the ground running with just nine days to go for their opening Fifa Under-17 World Cup clash against the United States at the Nehru Stadium here on October 6.

Having flown in from Goa on Tuesday, the team went into a final stage of training and preparation under the watchful gaze of head coach Luis Norton de Matos at the Conscient Football ground in Gurugram near here on the day.

Matos laid emphasis on tactical training and drills along with focus on set pieces in particular as the squad got into the final phase of preparations.

“A unique moment is upon us,” said Matos. “It is an amazing moment in Indian football’s history and everyone associated with it should be proud of it.

“The U-17 World Cup is a very big moment for every player as they will all become heroes. They will become the first Indian players to be part of a Fifa World Cup.

“These players will inspire generations to come, they will motivate posterity and that in itself is a victory,” he said.

“The level of enthusiasm in the camp is very high. We are prepared and the team has grown exponentially in the last couple of months. We plan to show the world that we are on the same page as the rest of the teams in the U-17 World Cup. “The team are raring to go and make history,” Matos added.

India are in Group A with USA, Colombia and Ghan. Colombia, the first team to arrive for the World Cup, are also at practice at the same training ground as the home side.

After the USA game, India play Colombia on October 9 and then Ghana on October 12 at the Nehru Stadium here. The kick-off for all matches is 8 pm.

Going into this last phase of preparations, the national football federation set up exposure trips to Europe and a four-nation tournament in Mexico alongside the hosts, Chile and Colombia.