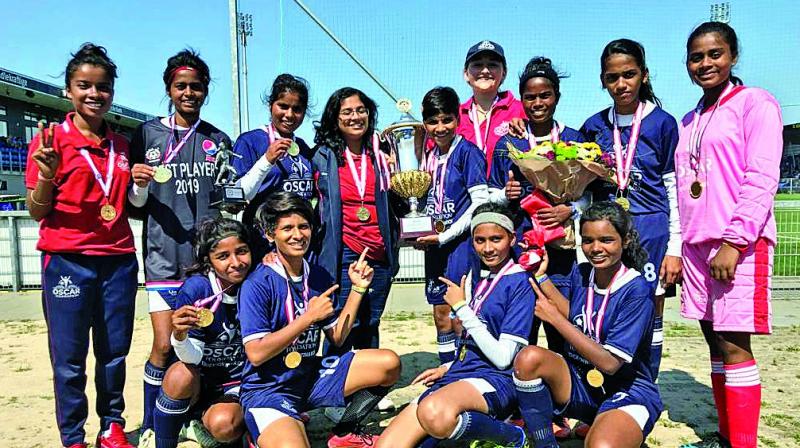 Many kids living in Mumbai’s slums, like Pooja Gautam and Priya Rathod found a breather and solace in football. Although they loved the sport, they never thought football would take them to Europe. They couldn’t afford to travel outside the city, and so, travelling to Europe was a distant dream.

But the dream became a reality when they got a chance to play with the U-16 girls football team from OSCAR Foundation in the Dana Cup 2019 Tournament in Denmark. The U-16 girls’ team comprised of players from Ambedkar Nagar slum in Mumbai and rural Jharkhand.

Funds for these girls were raised through Virgin Giving, a U.K. based charity fundraising platform. The girls made the most of this opportunity and came back as champions.

The players in the team had faced gender discrimination in their communities and were saved from dropping out of school and early marriage because of their passion for football.

“It’s a unique feeling. We had to put in a lot of hard work and now, we’re bringing home the trophy,” said Pooja, who used to play football in the bylanes of the city, but now, has represented India at the International level.

Their communities, like many in India, believed that football was only meant for boys, but with hard work and determination,  they want to change this perception. Winning the cup has been a big step in this direction.

“The community where I live believes that studying or playing football is only meant for boys. But I believe that I must do something to change this outlook,” Priya had said before the Denmark trip and she has stood true to her word.

“We did this for our mothers and all the girls in our communities,” she said after the title triumph.

The girls team played against four Norwegian teams — Bjarg IL (4-2), Skedsmo FK (5-2), Brodd FK (9-2), Hei IL (5-1) since July 21 and won all four games before their final match with Toten FK. OSCAR Foundation won their game with Toten FK by 2-1 and went on to lift the Dana Cup trophy.

Anita Kumari from Jharkhand scored the highest number of goals in the tournament and was given the Best Player award.

“Despite having limited access to resources such as nutrition, the girls have shown great courage and determination in the way they have played. Winning the trophy will inspire many other girls in the communities where we work,” Ashok Rathod, Founder, OSCAR Foundation, said.

Started in 1982, Dana Cup Hjørring is Denmark’s largest sporting event with foreign team participation being 90 percent. In the tournament’s 2019 edition, 1100 teams took on each other in seven-a-side games over a period of one week.