‘Elbow is a red card in the rules, the rule doesn’t say if it’s Messi or Ronaldo,’ complains Iran coach Carlos Queiroz who is a Portuguese. 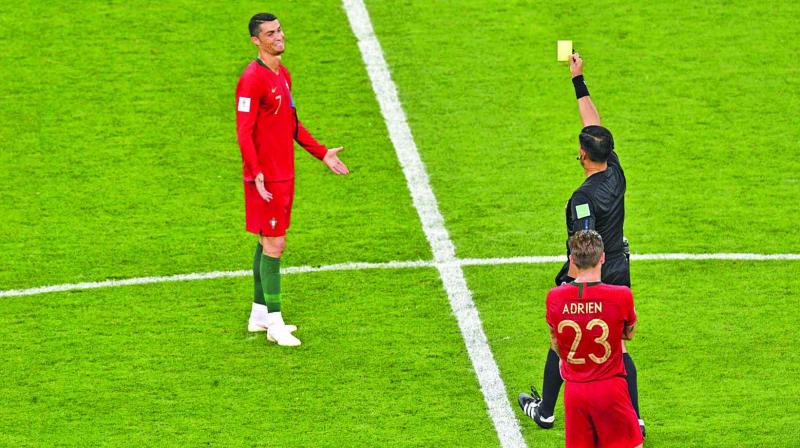 Paraguayan referee Enrique Caceres shows the yellow card to Portugal's forward Cristiano Ronaldo during the Russia 2018 World Cup Group B football match between Iran and Portugal. The Iran coach believed it should have been a red card for elbowing his player.

Elbow is a red card in the rules, the rule doesn’t say if it’s Messi or Ronaldo,” complains Iran coach Carlos Queiroz who is a Portuguese.

In the world of sport which champions dominate, usually at the cost of underdogs, the expression “We wuz robbed” is pretty common. It was heard again from the Iranian coach Carlos Queiroz after his team’s 1-1 draw with Portugal that saw Cristiano Ronaldo’s team advance into the last 16 at the expense of Iran. Ironically, Querioz is a Portuguese.

Quieroz seemed convinced that the system favours the champion players, the showboats of the game, as they bring the glamour and the big bucks. He lambasted FIFA and the referee saying he believed the official may have been under instructions to ensure Portugal and Ronaldo advance. The coach believes Ronaldo elbowing Morteza Pouraliganji merited his being sent off.

Spain too seemed to have a guardian angel in their fixture against Morocco, especially when defender Gerard Pique went flying in with a two-footed challenge on Khalid Boutaib. While Pique made very little contact with Boutaib, the Morocco striker was left in a heap on the floor after an extremely grim lunge. It was a sure red card for pundits on Football Extraaa. But it thankfully eluded the eagle eye of the RAR team, and left the grappling Spain to grind out a win in their favour! In the must-win Argentina knockout against Nigeria, as Messi fans prayed fervently for the GOAT to deliver, and he did resoundingly with a sublime goal from start to finish, the penalty claim by Nigeria was not given. In this instance, though, it was plain to see that the action by Marcus Rojo was not deliberate… as Argentina clawed back in to win the match 2-1.

“You stop the game for VAR, there is an elbow. Elbow. Elbow is a red card in the rules, the rules doesn’t say if it’s Messi or Ronaldo,” said Quieroz of the incident that floored Morteza Pouraliganji. He implied the referee could have been told to be lenient because Ronaldo is such a big name: “I don’t know if it was this but we have the right to know,” Quieroz said at the press conference.

“I don’t want to talk too much, it’s about my country and a player. I know it’ll be a war against me,” said Queiroz, who coached his native Portugal in the 2010 World Cup in South Africa. “No problem I get used to being one man against the nation, and one nation against the man since South Africa. I don’t have problems with that.”

Quieroz has a suggestion. For VAR to be universally accepted, the coaches and fans should be able to hear the communication between the referee and the video assistants. This happens in rugby and in cricket too. “We don’t know if it was the referee or the guys upstairs [who decided]. This game belongs to the people not to a couple of guys behind the scenes. My suggestion, Mr Infantino, they have to put up their hand and say: ‘Sorry, VAR is not working so we have to stop it,’ or the communication must be clear like rugby, when everybody knows what is going on.”

The Paraguayan referee, Enrique Cáceres, thrice referred to VAR reviews while awarding one penalty to each side, including a late penalty to Iran that fans thought was a dubious call. Earlier, Ronaldo equalled Mess in the anguish stakes in the World Cup by missing the penalty, which was saved by the Iranian custodian.

The controversial decision came after a long wait when the referee reviewed footage for the Ronaldo elbow on Morteza Pouraliganji. There was intent but only weak contact was made and in the end the referee gave a yellow. But Quieroz is not convinced.   “There’s no room for human mistakes, human mistakes was before, we accept that. Players make mistakes, coaches make mistakes and referees make mistakes. But now you have one system that cost a fortune, high technology, five or six people inside, whatever, nobody takes responsibility.”

Ronaldo had stomped off as the match ended and he did not reappear to join the other Portugal players. With four goals, the Portugal star is one behind Harry Kane of England in the race for the golden boot. But is there a point to the Qieroz angst that the big players are protected and nurtured by the system. Some fans do think so. In fact, Kalyanaraman, veteran sport enthusiast, says Ronaldo is capable of cheating and that he is glorified globally nevertheless.

Another football fan Leonard Gomes says, “I agree to a certain extent with Queiroz that certain decisions are more lenient on top teams and players. In Ronaldo's case, he lashed out in frustration with an elbow,,it does not matter how hard. Either that was a red card or no card at all. A yellow card was a cop out. You can see the expression on Ronaldo’s face when the ref came running back as.he expected a red card. The bigger mistake I feel was Sweden being denied a penalty against Germany without VAR even being called for or intervening. If the penalty had been given and converted at 2 -0 down, I think the Germans would be going home. That would not have gone down well with lots of people.”

The RAR controversies carry on as the World Cup sees the most amount of penalties given, with supporters on both sides. The game is beautiful because of its free-flowing football, which fans feel should be maintained otherwise there will nothing beautiful about the game. It’ll just be Var games on the pitch.