The U-18 team coach credits the team’s hard work for capping of a successful season with MDFA Super Division title. 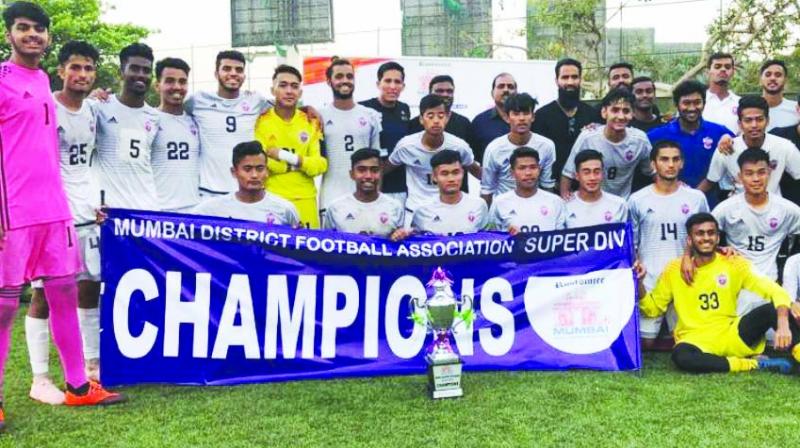 The players, coaches and support staff of FC Pune City are seen in a jubilant mood as they pose with the Super Division title along with Chief Guest, Clarence Lobo, hockey coach and recipient of the Dronacharya Award at the prize distribution at the Neville D’Souza ground, Bandra.

FC Pune City U-18 team capped off a successful season under coach Mehrajuddin Wadoo by winning the Super Division title. The Pune outfit maintained their impressive unbeaten record in the tournament by defeating Iron Born FC Under-19 team by a comfortable 4-0 margin in the concluding Super Division match of the Rustomjee-Mumbai District Football Association (MDFA) League 2018-2019 at the Neville D’Souza ground, Bandra.

The young Pune outfit was a disciplined lot who dished a pleasing attacking brand of football to dictate terms throughout. Strikers Akhil Rawat, Mark Zothanpuia, Laldawnkima Lalngathawma and Johnson Singh scored a goal each for the champions.

Pune City finished with an all-win record to tally 15 points and grab pole position and qualify for the Elite Division.

ICL Payyade rode on the brilliance of Aaron Olaide who slammed in all the four goals to steer the team to 4-1 win against Reliance Foundation Young (Under-16) Champs in another match of the same division. Reliance pulled one back through Zidan Ningthoujam. ICL Payyade with nine points from three wins finished runners-up, while Iron Born with seven points was placed third.

The FC Pune City youngsters had also reached the finals of the U-18 I-League this season before losing to Minerva FC 2-0 in the final. Earlier, they had topped the Maharashtra zone qualifiers for U-18 I-League and qualified the All India event from the state along with Reliance Foundation Youth Champs.

FC Pune City seemingly played in the MDFA League for better competition instead of Pune District Football Association’s League. “The team (management) had decided to field U-18 FC Pune City in the MDFA League. We were based in Vashi and trained at Fr. Agnel football stadium for the U-18 I-League and MDFA League. Qualifying for the knock-outs of the U-18 I-League for the first time in team’s history and winning MDFA League was possible due to hard work put in by the boys in the last six months,” said former International footballer Wadoo who played for Mumbai City FC in the Indian Super League and Mumbai FC in the I-League here.

“The team had 30-member squad and half of the team was from Maharashtra, 13 of them from Mumbai and few of them are very talented to play in top flight. We also played practice matches with Elite Division teams like Air India and ONGC and also beat the latter once,” added the former defender.

However despite such a successful season certain uncertainty looms on the team’s participation in Elite division of MDFA next season as Pune based ISL franchise is facing financial difficulties at the moment and have reportedly released many senior Indian and foreign players.