'I still don't know whether I'll be fit, I think it's probably unrealistic': Robben

Robben, 35, has been out of action for several months and is set to leave Bayern after a decade of service at the end of this season. 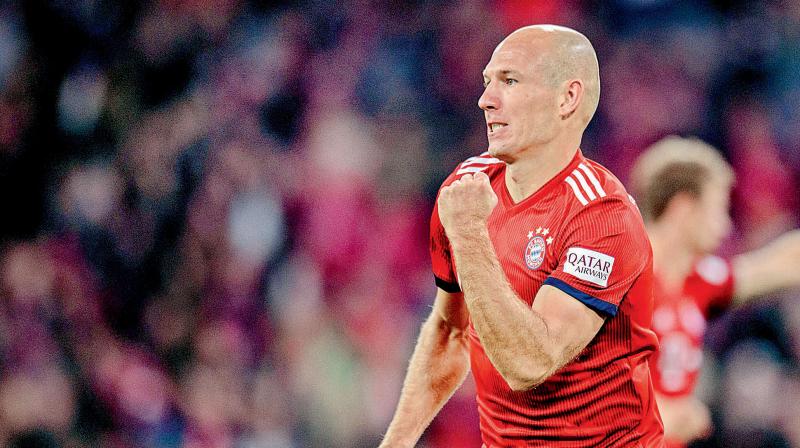 Robben had hoped to return to fitness in time for the Dortmund game, but now appears to have given up on the idea. (Photo: AFP)

Berlin: Bayern Munich's veteran Dutch winger Arjen Robben has admitted he is unlikely to make a fairy-tale return from injury in the Bundesliga club's top-of-the-table clash against Borussia Dortmund next week.

Robben, 35, has been out of action for several months and is set to leave Bayern after a decade of service at the end of this season. An iconic figure at the club, he had hoped to return to fitness in time for the Dortmund game, but now appears to have given up on the idea.

"I still don't know whether I will be fit, we will have to see, but I think it is probably unrealistic," Robben told Munich newspaper Abendzeitung at a charity run in central Munich on Wednesday evening. "I am on the road to recovery, but I am not yet training with the team," he said. "I think it will take a bit more time. All I can do is keep working hard and fighting to get back on the pitch."

Robben's last appearance for Bayern was in a 5-1 Champions League win over Benfica on November 27. Since then, he has struggled with a thigh injury and ongoing muscular issues. He was expected to return to full fitness after Bayern's winter training camp in Doha in January, but nearly three months on, he is still out of action.

In his 10 years at the club, Robben has become a Bayern legend, scoring 143 goals in 305 appearances and winning 11 domestic titles. His finest moment came at Wembley in 2013, when he fired Bayern to victory in the Champions League final with an 89th minute winner against Dortmund. Even if he is denied a final meeting with old foes Dortmund next week, Robben says he is determined to make another competitive appearance for Bayern before the end of the season.

"These are my last two months at a club where I have spent 10 years. I want to play again, to pull on the shirt one more time," he said. "That is the most important thing for me. I don't care which game it is."