Bayern wants a league and Cup double to make up for their earliest European exit in years. 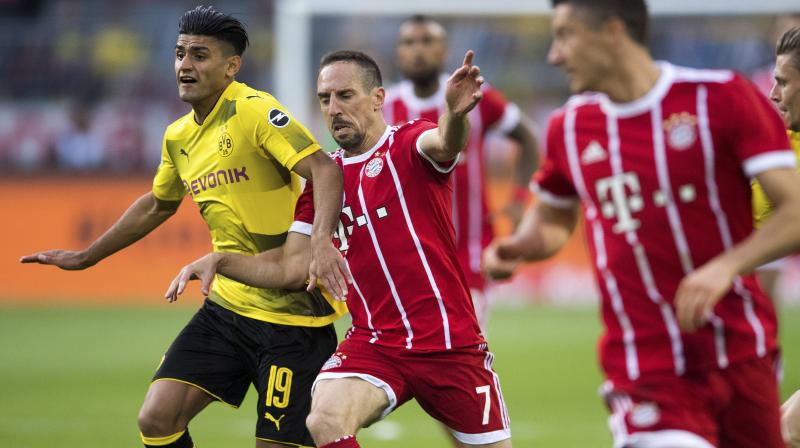 The Bavarians, who trailed Dortmund by nine points back in December, are now top of the table on 60 points, ahead on goal difference, having won 13 of their last 14 league matches. (Photo: AP)

Holders Bayern Munich and Bundesliga rivals Borussia Dortmund are preparing for the final stretch in their tight title race without the pressure of the Champions League after both teams were knocked out in the last 16.

Bayern, who had more players resting in the international break than usual after Mats Hummels, Thomas Mueller and Jerome Boateng were dropped from the Germany team, want a league and Cup double to make up for their earliest European exit in years.

The Bavarians, who trailed Dortmund by nine points back in December, are now top of the table on 60 points, ahead on goal difference, having won 13 of their last 14 league matches.

They visit Freiburg on Saturday as overwhelming favourites to extend that run and maintain their lead over the Ruhr valley club, who host VfL Wolfsburg, ahead of a mouthwatering clash next week between the two giants in Munich on April 6.

“It will be a remote battle this weekend for top spot but it will be tight and it is what neutral fans want to see,” Bayern’s Mueller told Kicker magazine of their battle for top spot.

“Dortmund cannot allow themselves any slip-ups because we are in really good form at the moment.”

The top scorer in the league this term, Bayern’s Robert Lewandowski, needs two more goals to break the 200 mark in the Bundesliga, a feat achieved by only four others before him, the last of which — Manfred Burgsmueller — did it in 1987.

For Dortmund things are also gradually starting to look up after a disappointing run in February and March that saw their German Cup and Champions League elimination. They also handed the lead in the Bundesliga to their rivals.

Dortmund have now won their last two league matches — and three of their last four — to stay on Bayern’s heels, with captain Marco Reus back from injury and hitting top form again in time for Saturday’s clash against the Wolves.

The Dortmund captain’s performances are key to their form this season, with his absence in February proving costly.

If history is anything to go by then Reus could be on target again against Wolfsburg, having scored 10 goals in his last 11 matches against them.