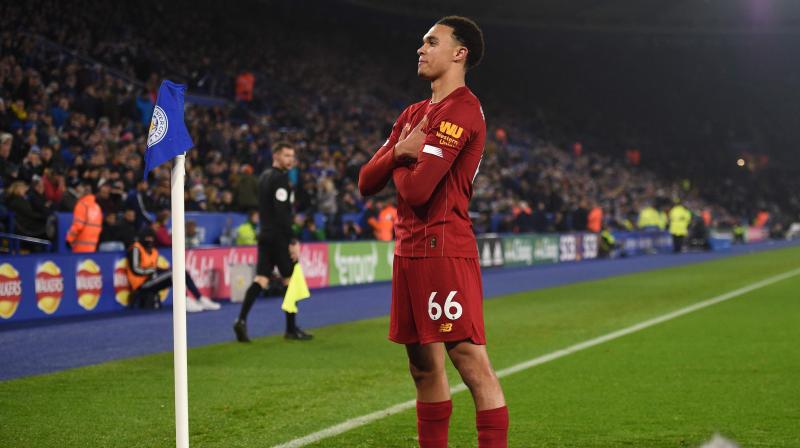 Leicester City manager Brendan Rodgers described Liverpool right back Trent Alexander-Arnold’s range of passing as “phenomenal” and said the 21-year-old’s attacking instincts were as good as that of a midfielder. (Photo: AFP)

Leicester City manager Brendan Rodgers described Liverpool right back Trent Alexander-Arnold’s range of passing as “phenomenal” and said the 21-year-old’s attacking instincts were as good as that of a midfielder.

Alexander-Arnold provided two assists for Roberto Firmino and scored late as the Premier League leaders blasted past second-placed Leicester 4-0 on Thursday to open up a 13-point gap at the top with a game in hand.

The academy graduate began his career in central midfield and got his first taste of senior soccer under former Liverpool manager Rodgers in 2015, but has excelled in Juergen Klopp’s back line making eight league assists this season.

“For me, he plays full back as a midfield player. His range of passing is phenomenal... he was a midfielder as a youngster,” Rodgers told a news conference.

“His quality, the experiences he has gained, for Juergen he has been absolutely amazing. Trent is up there and is very much England’s number one (right back) and playing consistently at a high level.”

Klopp said Alexander-Arnold’s crossing, which also led to a penalty against Leicester, was exceptional but he batted away questions on whether the right back was the best player in the world in that position.

“I’m not too interested, to be honest. We’re not looking for one, let me say it like this,” Klopp added.

“He played a really good game, but not a perfect game... it was decisive and helped us a lot. We know how important these crosses are for us, so that’s absolutely exceptional.

“But I can’t compare because at the moment I watch pretty much only Liverpool games so I don’t see the others.”