After a 2-0 loss at Watford last weekend, Ole Gunnar Solskjaer had demanded a response from his players. 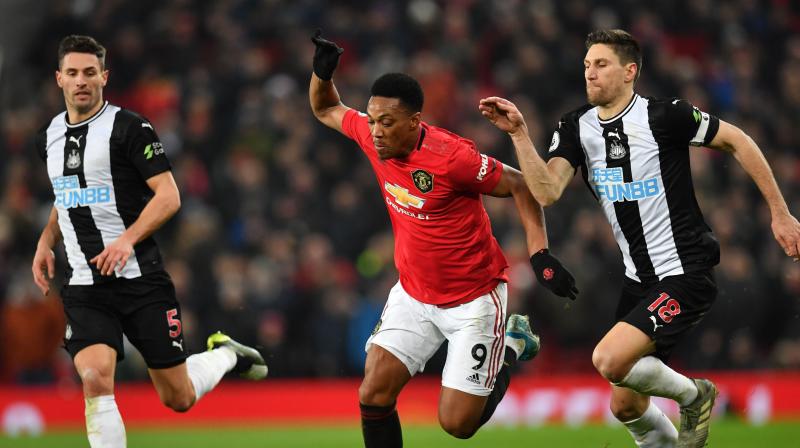 Anthony Martial scored twice as Manchester United hit back in emphatic fashion from a rocky start against a benevolent Newcastle United to open their Christmas programme with a 4-1 victory at Old Trafford on Thursday. (Photo:AFP)

MANCHESTER: Anthony Martial scored twice as Manchester United hit back in emphatic fashion from a rocky start against a benevolent Newcastle United to open their Christmas programme with a 4-1 victory at Old Trafford on Thursday.

After a 2-0 loss at Watford last weekend, Ole Gunnar Solskjaer had demanded a response from his players but a yellow card for Scott McTominay after 24 seconds and going behind to Matty Longstaff’s 17th-minute goal was not what he had in mind.

It was all smiles later though as Newcastle folded and Martial, Mason Greenwood and Marcus Rashford all struck before halftime before Martial scored again early in the second half as United moved back to seventh, four points off the top four.

United have now won 21 Premier League games on Boxing Day for a win percentage of 81 per cent — more than any other club.

With midfielder Paul Pogba also coming on after halftime, only his second appearance since September because of injury, United will hope to end an up-and-down year with a flourish with a trip to Burnley looming on the horizon on Saturday.

“Against Watford we were not good enough for our standard but the boys showed a great intensity today and we thoroughly deserved the three points,” defender Harry Maguire said.

“We have now got a big game in two days and our story so far has been a good performance and then a not so good one.”

Newcastle have made steady progress up the table under former United defender Steve Bruce and could have gone above United with a win on Thursday. So when 19-year-old Longstaff tucked his shot past David de Gea after linking well with Joelinton the away fans went wild.

It was Longstaff who scored the winner in the reverse fixture at St James’ Park this season, but any sense of dread for the Old Trafford faithful soon diminished as United sparked into life to play some flowing football.

Six minutes after Longstaff’s goal, United were level with Martial’s shot squeezing in at the near post when Newcastle keeper Martin Dubravka should really have kept it out.

Newcastle offered United another gift as they tried to play out from the back but merely gave the ball to 18-year-old Greenwood who thumped a left-footed cracker in off the crossbar.

It was Greenwood’s ninth goal of the season in all competitions and his emergence as a genuine goal threat has lifted the weight of expectation off the shoulders of Rashford who made it 15 for the season when he rose to head home Aaron Wan-Bissaka’s inviting cross before halftime.

Newcastle’s slipshod defending reached its nadir in the 51st minute when Sean Longstaff’s careless back pass was pounced upon by Martial who Dubravka with ease.

“We had a horrible 20 minutes before halftime,” Newcastle boss Steve Bruce said. “For the last two or three months we have been hard to beat. I know it’s Christmas but I don’t think Manchester United can believe it, we’ve made too many mistakes.”

Newcastle, who have now lost more Boxing Day games in the Premier League than any other side (14) remain in 10th spot.