Real Madrid underlined their return to top form with a spectacular Champions League display at home to Paris Saint-Germain. 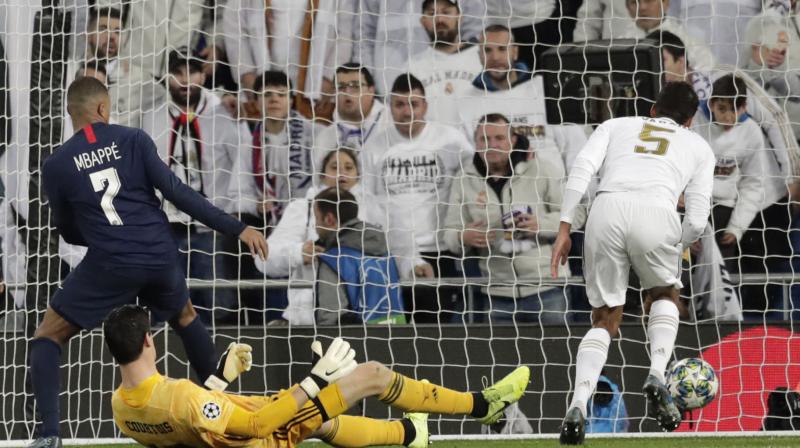 Karim Benzema knocked into an empty net to give Real the lead in the 17th minute of his 100th Champions League start and the French forward doubled the advantage with a 79th minute header. Yet Kylian Mbappe immediately reduced the deficit in the 81st minute, capitalising on a mistake from Real goalkeeper Thibaut Courtois before Pablo Sarabia equalised in the 82nd. (Photo:AP)

Madrid: Real Madrid underlined their return to top form with a spectacular Champions League display at home to Paris Saint-Germain on Tuesday but they still had to settle for a 2-2 draw after two late strikes secured top spot in Group A for the French side.

Real had sealed their place in the knockout stages for a record-extending 23rd successive year thanks to Club Bruges’ 1-1 draw at Galatasaray earlier, while PSG had also already qualified.

Yet with top spot on the line, as well as pride after PSG had crushed Real 3-0 back in September, both sides played with the passion, skill and commitment of a blockbuster knockout tie, serving up a thrilling game at the Santiago Bernabeu.

Karim Benzema knocked into an empty net to give Real the lead in the 17th minute of his 100th Champions League start and the French forward doubled the advantage with a 79th minute header.

Yet Kylian Mbappe immediately reduced the deficit in the 81st minute, capitalising on a mistake from Real goalkeeper Thibaut Courtois before Pablo Sarabia equalised in the 82nd.

PSG’s fightback added to concern in the stands after Real winger Eden Hazard hobbled off in the second half with an ankle injury, although substitute Gareth Bale almost snatched a winner when he struck the post in added time from a free kick.

Real coach Zinedine Zidane was annoyed that his side could not toast their sizzling display with a victory but paid tribute to his players.

“I liked everything we did and the performance of every player. They all showed attitude and played superbly. The game was a true spectacle,” he told reporters.

“The players deserved to win. I wouldn’t normally say that because a match is about the whole 90 minutes but after playing as well as we did I believe it.”

Zidane added that Hazard, who has burst into a form after a slow start to life at Real, had twisted his ankle but did not give any more details on the injury.

PSG midfielder Marco Veratti admitted his side had been outplayed for sections of the game but praised them for their reaction.

“In the first half, we didn’t play our game and suffered too much but it’s hard to avoid suffering away to Madrid. Few teams win here,” he said.

“We were a little more courageous in the second half. Even though we gave away a lot of chances, we played like we know how.”

PSG top Group A with 13 points from five games while Real are second on eight. Club Bruges, who Real visit in their final game next month, are third on three points, while Galatasaray, who will travel to PSG, are bottom with two.

Real were cruising in the first half but the game looked set to be shaken up when PSG were awarded a penalty and Courtois was shown a red card for hauling down Mauro Icardi in the area.

But the referee overturned both decisions following a VAR review, and awarded Real a free kick instead for a foul on Marcelo in the build-up.

Madrid, who had won five of their previous six games, produced a dominant display but were let down by slack defending in the closing stages.

They should have killed the game off long before Benzema’s second but were repeatedly denied by their former, much-loved keeper Keylor Navas.

The Costa Rican, who won three consecutive Champions League crowns with Real before moving to Paris at the start of the season, made 10 saves, including a stunning block to deny Benzema from point-blank range.