FIFA Under-17 World Cup: Ruiz has England in sights

Spain star is focused on winning final and not Golden Boot. 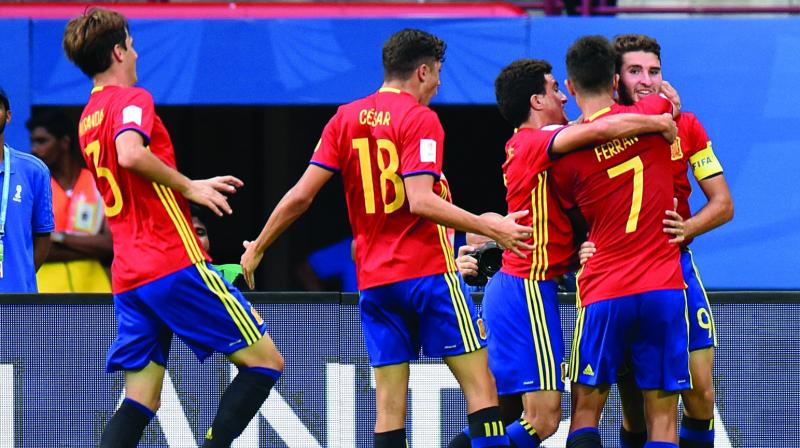 Spain’s Abel Ruiz (right), with six goals, is currently the second highest scorer in the Fifa Under-17 World Cup behind England striker Rhian Brewster, whose tally is seven. (Photo: AFP)

Mumbai: Spanish Under-17 star Abel Ruiz, who has scored six goals in the ongoing World Cup including two in the semi-final against Mali, is not thinking about the Golden Boot award. The Barcelona B team forward is focused on the final against England and is not looking at his graduation to senior level in the club after his India heroics.

“I am concentrating only on the final against England. I am not thinking about the Golden Boot. I love the challenge of scoring for the team and want to get more goals for the team,” he said after leading his side to a 3-1 win over Mali on Wednesday night.

Ruiz is excited at the prospect of facing England, whom they defeated in the final on penalties after a 1-1 score in regulation in the U17 European Championship final this May.

“We played England in the Euro final and we know the team. We are excited to play them again,” said Spain skipper Ruiz, one goal behind leading scorer Rhian Brewster who will spearhead England in Kolkata on Saturday.

Spanish coach Santiago Denia wasn’t surprised with Ruiz’s display. “It was not a surprise to me. He’s very demanding of himself. And he’s the first one to know he could have scored more goals. In order to win the final he needs to score those goals,” he said.

Scrap in-stadia replays, demands Denia
Spain’s goalscoring prowess was overshadowed by the ghost goal from Cheick Oumar Doucoure in the second half when Mali were 0-2 down. It has been touted as the Frank Lampard moment from 2010 World Cup.

Replays on the giant stadium screens infuriated the Mali bench and also crowd that got behind Mali. Denia wasn’t happy about the situation and wants replays in stadia scrapped.

“From our point of view, we need to respect the referee. It’s not an easy job. I suggest replays should not be shown inside the stadium as it can influence the referees or people inside,” he said.

“The idea was to avoid transitions as they take away your energy, but sometimes the pace of the game dictates how you play. The idea was to keep ball possession, but if you could not do that then you have to play the transition, with caution,” he said.