In 23 Champions League home games under the Argentine, Atletico have won 18, lost only once and kept 18 clean sheets. 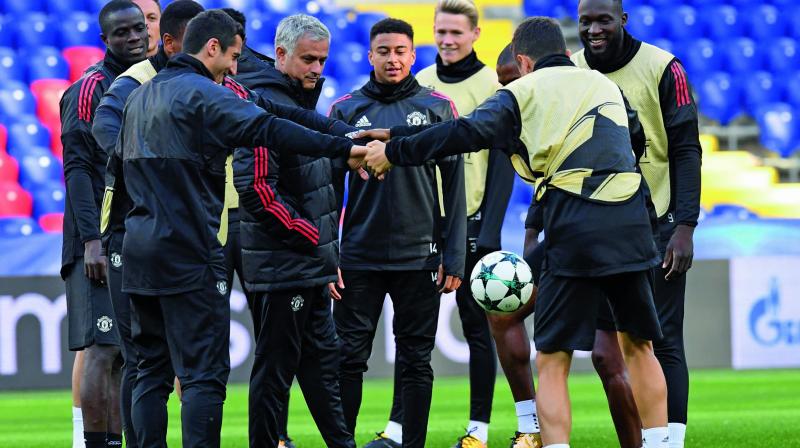 Manchester United coach Jose Mourinho and players at a training session in Moscow on Tuesday, the eve of their Champions League Group A match against CSKA Moskva. (Photo: AFP)

Madrid: It may lack a final lick of paint but “it appears like the Circus Maximus,” crowed proud Atletico Madrid coach Diego Simeone at the special atmosphere already produced by his club’s new Wanda Metropolitano home.

The opening of the 68,000 capacity stadium marks heady days for a club that has traditionally lived in the shadow of neighbours Real Madrid, none more so in the Champions League in recent years.

Atletico have fallen to Real in the quarters, semis and twice in the final in the past four seasons, but there is a sense of optimism flowing through the red and white half of Madrid as Chelsea travel to the Spanish capital for the Wanda’s Champions League debut on Wednesday.

Fears that Atletico’s form could slump due to the move in a manner suffered by the likes of West Ham and Tottenham Hotspur in recent times have been blown away by back-to-back wins over Malaga and Sevilla.

In 23 Champions League home games under the Argentine, Atletico have won 18, lost only once and kept 18 clean sheets.

Chelsea were one of the few sides to escape without defeat with a 0-0 draw in the semi-final, first leg between the sides in 2014. Atletico, though, had the final say as Simeone famously charged down the Stamford Bridge touchline in celebration during a 3-1 second leg win for the Spaniards.

Man Utd face Moscow
In Moscow, Manchester United manager Jose Mourinho has encouraged his players to remain “humble” as they look to take control of Group A by beating CSKA Moscow.

United are level on points with leaders Manchester City in the Premier League after winning five and drawing one of their first six games and some of their football has been dazzling.

They beat Basel 3-0 in their Champions League opener, but Mourinho criticised his players for playing “PlayStation football” in the game’s latter stages and he warned the wheels could quickly come off if they lose focus.

In-form attacking midfielder Henrikh Mkhitaryan said Mourinho’s words after the Basel game had made United’s players doubly determined not to let their levels drop even once games are in the bag.

United are without Marouane Fellaini due to an ankle injury and with Paul Pogba and Michael Carrick also sidelined, Nemanja Matic and Ander Herrera are their only fit central midfielders.

CSKA manager Viktor Goncharenko played down the significance of United’s absentees, but he thinks his side can cause Mourinho’s men problems.

CSKA opened their campaign with an impressive 2-1 win away to Benfica and having come up against the Moscow giants several times in his managerial career, Mourinho feels this is the strongest they have ever been.

In Turin, Juventus’s deadliest weapon Paulo Dybala warned “everything is going my way” as the rising Argentine star turns his focus to Wednesday’s clash with Greek champions Olympiakos.