Amrinder Singh keyed up for season

The Mumbai City FC goalkeeper Amrinder Singh is looking to strengthen the team’s defence once again. 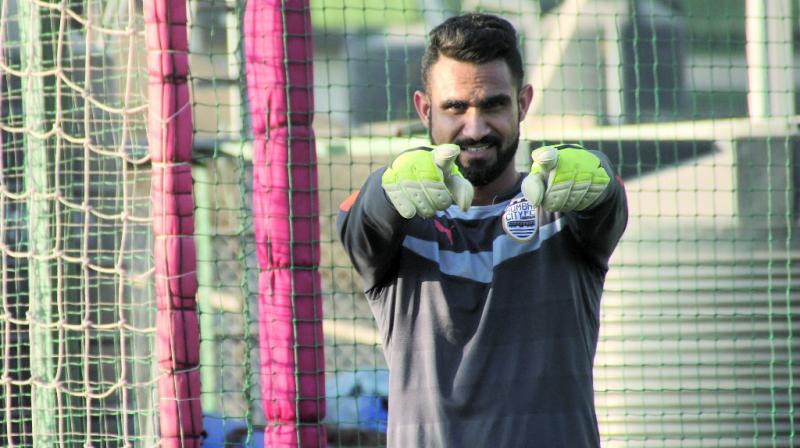 Mumbai City FC has retained goalkeeper Amrinder Singh for another season. He says the healthy competition with the national goalkeeper Gurpreet Singh Sandhu ensures he works harder every day.

The Mumbai franchise is gearing up for another excruciating season by building a young and energetic squad. The Ranbir Kapoor-owned team has retained two players from their previous season’s campaign, the promising goalkeeper Amrinder Singh and sturdy midfielder Sehnaj Singh.

“It feels lovely to be one of the two retained players. I must keep improving myself as there is competition from the new keepers as well. The club is very professional and welcoming. It’s great to be back with them. The association with the club has been incredibly enjoyable,” says a delighted Amrinder.

Although he has comparatively less international exposure, the experts have termed Amrinder as an exciting prospect. Currently, Gurpreet Singh Sandhu, who is also playing for Stabæk in the Norwegian professional league, holds the first team spot for the goalkeeper’s position. “Rather than being a challenge (Gurpreet’s position in the team) it provides the fuel required to work even harder and improve myself,” says Amrinder.

The 24-year old shot-stopper is the current holder of Indian Super League’s (ISL) Golden Glove for keeping the maximum clean sheets in the 2016 edition (five). “I go by my favourite quote ‘Practice like you have never won, and play like you have never lost’, so yes, I will try my best to defend it,” says Amrinder.

While discussing his chances with the European Leagues, he said, “Right now my goal is to focus on what is in front of me and give it my best. In future, if some opportunity comes along, then I will surely not hesitate.”

As Amrinder talked about his journey with football, he revealed that he wasn’t always a goalkeeper. “My journey started as a striker then transformed into a goalkeeper by my coach in Punjab. My first professional experience was with the Pune FC, where my journey began. After that, playing for the national team became a reality in the Asian games. The association with Bengaluru FC has also been memorable. Now, playing in the ISL, I realise I have come the distance, but I feel there is a long way to go. I got a chance to play alongside a legend like Diego Forlan who has such vast knowledge about the game,” said the goalie.

Mumbai City FC signed 13 new Indian players for the upcoming season in the draft that took place on Sunday. The team missed out in the previous season by a few inches, as they were defeated in the semi-finals. To this, he asserts, “The team is strengthened with the addition of excellent players. I think we have a good opportunity this season to make it to the top.”

The fourth edition of ISL will be the longest compared to the previous seasons, extending to five months instead of three. The addition of two new teams, Jamshedpur FC and Bengaluru FC will increase the roster of teams to 10. “The addition of two new teams will be a challenge. There is more competition to look forward to. Also, a five-month season will be something that will be quite different from previous years. We must be physically and mentally prepared for it,” says the talented Amrinder.