Chile play out draw against Australia, set to face Ronaldo’s Portugal in semis. 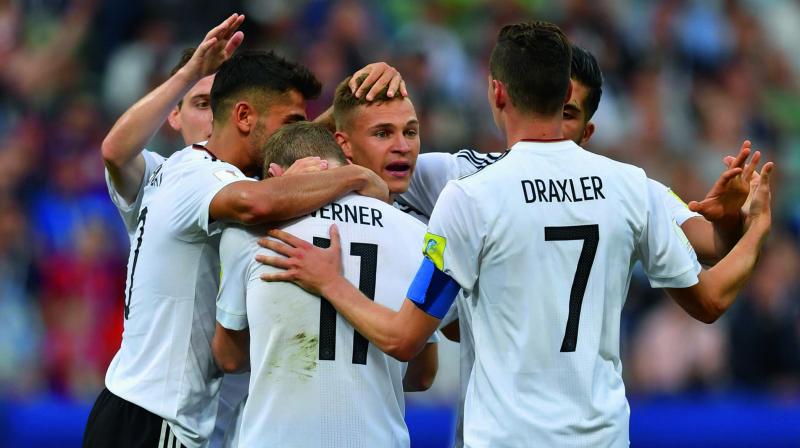 Germany forward Timo Werner celebrates his goal with team mates in their Confederations Cup Group B match against Cameroon in Sochi on Sunday. (Photo: AFP )

Sochi: Germany’s Joachim Loew said he is looking forward to facing Mexico on Thursday in the Confederations Cup semi-finals after the world champions pipped Chile to top spot in Group B.

The Germans play Mexico in Sochi for a place in next Sunday’s final in Saint Petersburg while Chile meet Cristiano Ronaldo’s Portugal in the other last-four clash on  Wednesday in Kazan. “Mexico is going to be a tough game, they are a very flexible team with very good players,” said Loew, who became the first head coach to achieve 100 international wins.

“We don’t often play central American sides, so that will be interesting for us, but we need to be on our guard.”

Germany’s Timo Werner, 21, netted twice in Sunday’s 3-1 win over 10-man Cameroon which saw them finish two points clear of Chile, who rallied for a 1-1 draw with Australia in Moscow. After Kerem Demirbay opened the scoring in Sochi, Werner struck either side of Vincent Aboubakar’s consolation effort on 78 minutes.

Cameroon had Ernest Mabouka sent off in controversial fashion on 64 minutes for a dangerous tackle on Liverpool’s Emre Can. Referee Wilmar Roldan initially dismissed Sebastien Siani before the video assistant referee rectified his error.

Loew, in his 150th match in charge of Germany, maintained his impressive record of reaching the semi-finals of every tournament over the last decade. Loew praised his inexperienced side for overcoming Cameroon. Meanwhile, Chile had to come from behind to salvage a point against Australia in Moscow.

After James Troisi put the Asian champions ahead on 42 minutes at Spartak Stadium, Chile replied through half-time substitute Martin Rodriguez on 67 minutes to advance as Group B runners-up.

Chile coach Juan Antonio Pizzi insisted they hadn’t underestimated Australia, who are heading home after their bid to edge the Copa America holders to second place fizzled out. “That could have been a quarter-final in the World Cup, such was the level of this game,” said Pizzi.

“We are happy to reach the semi-finals and reach that aim. Now we must refocus on our next ambition.” Australia boss Ange Postecoglou regretted his side’s missed opportunities. “We wanted to get out of the group and we haven’t, so we are disappointed,” said Postecoglou.

“They (Chile) are a world class team, a fantastic team, and have played some of the best teams in the world off the park. “We needed energy to face that and the guys who came in did a great job. From my perspective, it was a great performance.”

Century for Cahill
Postecoglou praised veteran forward Tim Cahill as Australia’s captain made his 100th international appearance. He joined long-serving former goalkeeper Mark Schwarzer (109) as the only other Australia player to reach the landmark.

Cahill originally played youth international football for Samoa and was only cleared to feature for Australia after Fifa changed its eligibility rules in 2004. “It’s an unbelievable achievement to have played 100 games as he didn’t play for Australia until he was 24, because he wasn’t allowed to,” said Postecoglou.

“He could have been sat here with 120, 130 games, very easily. “Every time he has played at the highest level, at World Cups, he has scored goals. He is a fantastic influence.”