Rolling back the years, Beckham was firing cross-field balls, Jaap Stam showed no mercy at the back and Paul Scholes bossed the midfield. 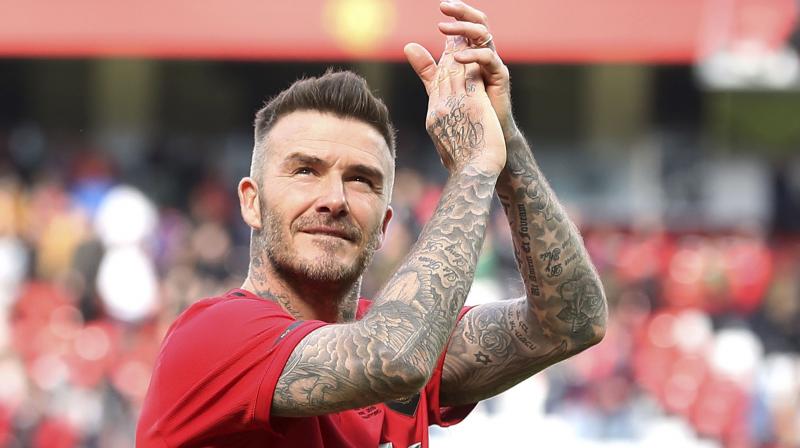 The reception for Solskjaer was eclipsed by the one afforded to Beckham. (Photo: AP)

Twenty years after Solskjaer scored the last-gasp winner that helped Alex Ferguson's side beat Bayern in the Champions League final, the current United boss joined his old team-mates for a charity match against the Germans at Old Trafford.

Solskjaer again started on the bench as he did in the Camp Nou final, but he wasted little time after coming on for Andy Cole, turning home the opener after Dwight Yorke was denied.

With Ferguson back in the dugout as the manager for the day, there was a feelgood factor in the air at Old Trafford for United's 5-0 win after a troubled season for the current generation.

It was the first time Ferguson, 77, had managed a United team since his retirement in 2013.

He sat with ex-England boss Steve McClaren, his assistant 20 years ago.

The reunion match, in aid of the Manchester United Foundation, was also the first time Ferguson had been on the pitch since undergoing major surgery after suffering a brain haemorrhage last May.

Now and then 🌟#Treble99 pic.twitter.com/SYuA7K7H7O

Rolling back the years, David Beckham was firing cross-field balls, Jaap Stam showed no mercy at the back and Paul Scholes bossed the midfield.

Once again, thank you for your magnificent support, Reds 👏👏 #MUFC pic.twitter.com/RdxmQsST8E

Solskjaer went off midway through the first half and skipper Peter Schmeichel followed suit shortly after Dwight Yorke scored a superb second for United Legends.

Full-time scenes at the Theatre of Dreams 🥰#MUFC #Treble99 pic.twitter.com/J4MzowxOh6

Thanks to their two late goals against Bayern, United remain the only English club to win a treble made up of the Premier League, FA Cup and Champions League in one season.

As the latest man charged with trying to engineer a return to those glory days he was such an integral part in, Solskjaer's efforts were greeted with enthusiasm by a crowd in excess of 60,000.

Popular as he is, the reception for Solskjaer was eclipsed by the one afforded to Beckham.

The former England skipper, 44, sold to Real Madrid in 2003 after a fall-out with Ferguson, got a standing ovation every time he went to take a corner.

How good was it to see Becks back at Old Trafford yesterday? 👋 #MUFC #Treble99

Changes aplenty punctuated the second half rather than goals, with Stam, Scholes and Denis Irwin among those to be replaced to rapturous applause.

Nicky Butt netted United's third of the afternoon 11 minutes from time as he coolly stabbed home a Louis Saha cross.

Saha, one of the handfuls of non-treble winners playing for United, slotted home the fourth in the 85th minute as he turned home a Jonathan Greening cross.

In a fitting finale, Beckham got behind the Bayern backline and showed quick feet before firing home in front of the Stretford End, leaving Ferguson wreathed in smiles and the crowd on their feet in delight.