Fans will watch Spain’s Copa del Rey final between Barcelona and Alaves on Saturday and a charitable match on Sunday. 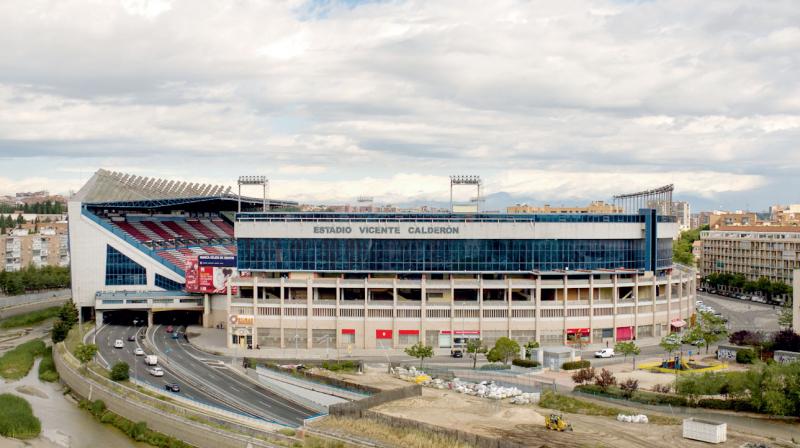 The Spanish League game against Athletic Bilbao on Sunday will be Atletico Madrid’s last at the old-fashioned Vicente Calderon Stadium. (Photo: AP )

Madrid: Atletico Madrid’s mythical Vicente Calderon Stadium will soon be history: sad news for supporters of Real Madrid’s rivals but not so for locals who hope the neighbourhood will improve once noisy fans are gone.

This weekend spells the end for the ageing structure that for over 50 years has housed Atletico — not as well known abroad as the world-famous Real Madrid despite fielding players like French star Antoine Griezmann but with a huge following in the Spanish capital.

Fans will watch Spain’s Copa del Rey final between Barcelona and Alaves on Saturday and a charitable match on Sunday.

Next year, the stadium that currently stands on the shores of the Manzanares river in southern Madrid, surrounded by blocks of flats and cheap cafeterias, will be razed to the ground.

“I’ve been a member since the 2001-2002 season, when the Atletico was in second division,” says Oscar Fernandez, 23, standing near the stadium in Madrid’s Imperial district.

Wearing the red and white shirt of a club that has since risen back to dizzying heights, winning the La Liga top division in 2014 and reaching Champions League finals in 2014 and 2016, Fernandez says he lives in Rome but returned expressly to see the final games at the Vicente Calderon. The stadium “is part of my life,” he says.

A visceral attachment
From next season, Atletico — which ended third in La Liga this year — will play on the other side of the Spanish capital, at a stadium called the Wanda Metropolitano.

But fans are hugely attached to the worn stadium, under which passes a ring-road that circles Madrid, where Atletico played for the first time on October 2, 1966.

Javier Fischer, 30, is so nostalgic that he has reserved three stadium seats to take away as a souvenir, one of them in memory of his father who died a year ago.

Last Sunday, he was there for Atletico’s last La Liga game in the Calderon — “the saddest day ever here,” he says, despite his team’s 3-1 victory over Athletic Bilbao.

Standing in front of the club’s office, Valentin Hernandez agrees with Fischer, but he also acknowledges that “the Calderon was too small.”

“Atletico needs to change with the times, like the big European teams,” he says.

In order to help finance the stadium, the club sold the naming rights to China’s multinational Wanda Group, which also owns 20 percent of the club.

By so doing, it hopes to close the gap with Barcelona and Real Madrid, which made more than 600 million euros each this season.

Still, the new stadium in the San Blas district is in a remote area in eastern Madrid, far from southern parts of the Spanish capital which traditionally support Atletico more than Real Madrid.