Quagliarella is enjoying a resurgence this year and leads Serie A with 21 goals, earning him a spot in a squad filled with youth. 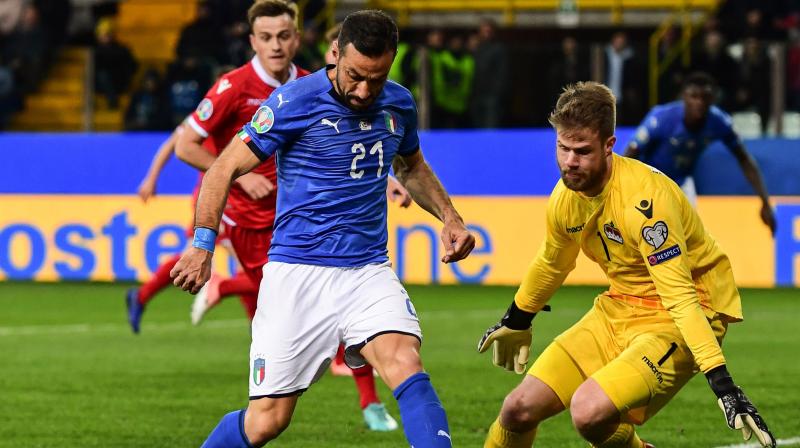 Italy moved into sole lead of Group J, two points ahead of Greece and Bosnia and Herzegovina, which drew 2-2. (Photo: AFP)

Parma: Veteran forward Fabio Quagliarella became the oldest player to score for Italy as he converted two penalties to help the Azzurri beat 10-man Liechtenstein 6-0 on Tuesday in qualifying for the 2020 European Championship. It was the first international goals in 8 years for the 36-year-old Quagliarella, and the Sampdoria forward had tears in his eyes after converting his first penalty and being given a standing ovation by the fans at the Stadio Tardini.

Quagliarella is enjoying a resurgence this year and leads Serie A with 21 goals, earning him a spot in a squad that has been filled with youth since Roberto Mancini took over as Italy coach. "It's difficult to say now if he can make it to the Euros," Mancini said. "Things are going well for now but it's difficult to say what could happen between now and June 2020. But a serious player like him can still continue for a long time."

At the other end of the spectrum, teenager Moise Kean also scored to make it two goals in as many starts for Italy. Italy moved into sole lead of Group J, two points ahead of Greece and Bosnia and Herzegovina, which drew 2-2.

Armenia lost 2-0 to Finland and has zero points, along with Liechtenstein.
Italy had opened its European Championship qualifying with a 2-0 win over Finland on Saturday. And it broke the deadlock in Parma in the 17th minute when Leonardo Spinazzola floated in a cross for Stefano Sensi to head into the top left corner for his first international goal.

Marco Verratti doubled Italy's tally in the 31st with a solo effort as he dribbled between a crowd of Liechtenstein players on the left side of the area before curling into the far bottom corner. It was only Verratti's second goal for his country but he was involved in Italy's third as well, as the host was awarded a penalty when his strike ricocheted off Nicolas Hasler's arm.

Quagliarella stepped up and converted, prompting huge celebrations as he overtook Christian Panucci as Italy's oldest scorer. His substitute appearance against Finland was his first Italy match since November 2010. "I thank Jorginho and (Leonardo) Bonucci," Quagliarella said. "They are the penalty takers and they told me to take them. They said 'it's your night, you take it.' ... I thank the fans for their cheers and the wonderful standing ovations: memories that I will always keep with me."

Quagliarella doubled his tally in first-half stoppage time with another penalty after Verratti's shot came off Daniel Kaufmann's shoulder. The Liechtenstein defender was also sent off. That goal ended a run of 18 Italy goals being scored by 18 different players.

Despite the numerical disadvantage the floodgates did not open after the break and Italy had to wait until the 70th minute before extending its advantage.
Spinazzola floated in another cross and Quagliarella nodded it back across the area for Kean to head in from point-blank range. Quagliarella was substituted shortly after to a standing ovation and replaced by Leonardo Pavoletti.
The 30-year-old Pavoletti took four minutes of his Italy debut to get on the scoresheet. His initial effort was saved but the Cagliari forward tapped in the rebound.

It was the first time Italy had scored six goals in a competitive game since 1993, against Malta. Two of its goals that night were scored by Mancini. In Zenica, Greece fought back from two goals down to pick up a valuable point. Bosnia midfielder Miralem Pjanic scored a superb free kick but was sent off for a reckless challenge a minute after Greece had pulled one back with a penalty. Dimitris Kolovos headed in the equalizer four minutes from time. Fredrik Jensen and Pyry Soiri scored for Finland.