Manchester United, which won the first leg 2-0, advanced with a 3-2 win on aggregate and will play Southampton in the final on February 26. 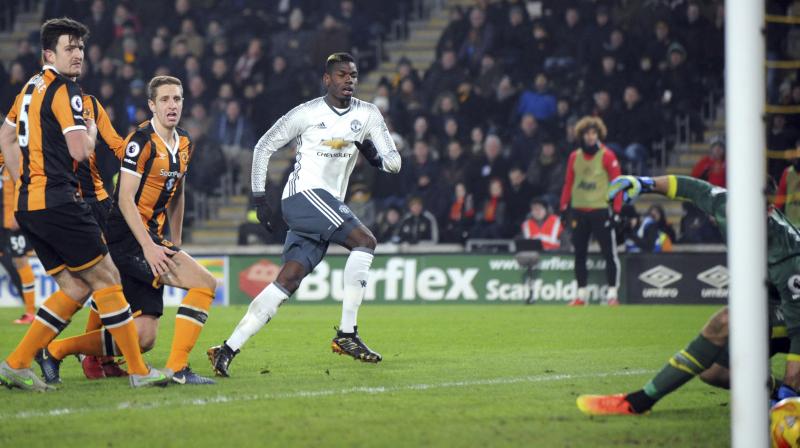 It was United's first loss since a 2-1 defeat at Fenerbahce in the Europa League on November 3. (Photo: AP)

Hull: Manchester United reached the English League Cup final despite surrendering its 17-match unbeaten record with a 2-1 loss to Hull in the second leg of their semifinal on Thursday.

United, which won the first leg 2-0, advanced with a 3-2 win on aggregate and will play Southampton in the final at Wembley Stadium on February 26.

On-loan striker Oumar Niasse scored the winner with an 85th-minute tap-in, and another goal for Hull would have sent the game into extra time.

Tom Huddlestone gave the hosts the lead at KCOM Stadium by converting a 35th-minute penalty, awarded for Marcos Rojo's tug on Harry Maguire at a corner. Paul Pogba equalized from close range in the 66th, a bright spot in an otherwise disappointing display by the France midfielder.

United produced one of its most sluggish performances of the season, perhaps through complacency because of its commanding lead from the first leg at Old Trafford.

"We're disappointed the way we played," United midfielder Michael Carrick said. "It's a strange feeling, we wanted to keep our run going."

United will look to win a fifth League Cup title and a first trophy under Jose Mourinho, who has won all three of his League Cup finals as a coach.

Southampton's only major trophy came in 1976, with a win over United in the FA Cup final.

It was United's first loss since a 2-1 defeat at Fenerbahce in the Europa League on November 3.

"We didn't play well at all, really," Carrick said. "We are delighted to be there and we will shake this off."