Chelsea have registered 11 consecutive wins within the same season for the first time after winning 1-0 at Crystal Palace last weekend. 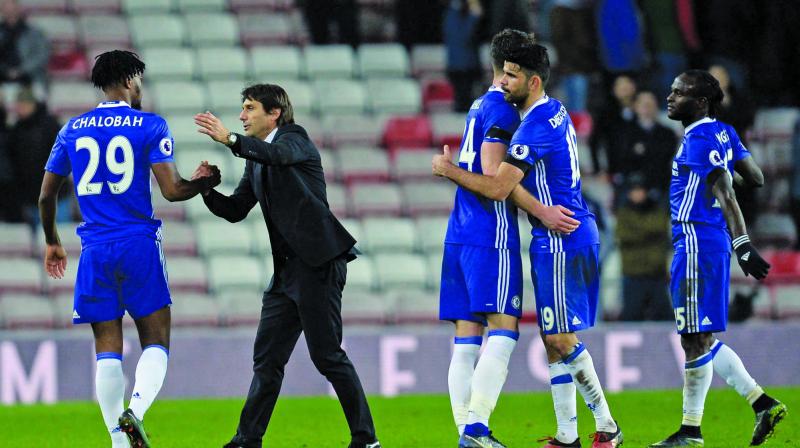 Table toppers Chelsea will host Bournemouth in their EPL clash at Stamford Bridge on Monday in search of their 12th consecutive win, which would set a new club record. (Photo: AP)

London: Chelsea’s Antonio Conte and his Manchester City counterpart Pep Guardiola are among the Premier League managers who will sample England’s Boxing Day football extravaganza for the first time on Monday.

While the rest of the population gorges on Christmas turkey dinners and knocks back festive drinks, 16 teams will be gearing up for matches as part of a custom that stretches back over 150 years. With Chelsea six points clear at the summit and chasing a 12th consecutive win, which would set a new club record, Conte is approaching the visit of Bournemouth with a spring in his step.

“This is the first experience for me and my family, to work, to play football (at this time of year),” said the Italian. “It can be, and I hope it will be, a fantastic experience. The atmosphere we find in this period is very difficult to find in another period. It’s fantastic.”

Chelsea have registered 11 consecutive wins within the same season for the first time after winning 1-0 at Crystal Palace last weekend. Another victory will leave them one win from equalling Arsenal’s 2002 record for successive wins in the same campaign, which they extended to 14 the following season. But Conte will be without both top scorer Diego Costa and midfield lynchpin N’Golo Kante after they picked up suspension-incurring bookings at Palace.

Guardiola, too, is full of festive cheer following his side’s 2-1 comeback win over Arsenal last weekend, which left City seven points below Chelsea in third place. While the former Barcelona and Bayern Munich coach appreciates the novelty of Christmas football, he is preparing for his side’s match at bottom club Hull City by pretending it is a regular fixture.

“This is my first year here and people say that at Christmas you have to be focused, because at home you celebrate with dinner and lunch, and we have to be prepared,” Guardiola said. “We are going to train on the 25th in the afternoon and travel to Hull to play on the 26th. We will prepare for the game as if it was not Christmas time or Boxing Day.” Arsenal slipped to fourth, nine points off the pace, after their loss at the Etihad Stadium, which followed hot on the heels of a 2-1 defeat at Everton.

Arsene Wenger’s side welcome West Bromwich Albion to the Emirates Stadium on Boxing Day and centre-back Gabriel says his side cannot afford to be distracted by seasonal excitement. “I think all players just want to be focused on the game, rather than celebrating,” the Brazilian told the Arsenal website. “If I do have some time, I’ll organise a dinner with my friends to make the most of the short time off. Then, I have to be ready and focused again.”

Man Utd face Sunderland
Jose Mourinho has long been an avowed admirer of England’s Boxing Day traditions and with his Manchester United team chasing a fourth straight win, he is relishing the prospect of Sunderland’s visit.

“I love it!” Mourinho told MUTV. “I know that the family miss something from us, but the family loves us. “They know us, they know our nature, they know that we are happy playing football, giving all of the people that love football something really special in a period when almost no country has football for the fans.”

Sunderland manager David Moyes will return to Old Trafford for the first time since he was sacked by United in April 2014. Champions Leicester City will hope to give their supporters some Christmas cheer when they host Everton in a repeat of the fixture that preceded last season’s title coronation. Top of the table last Christmas, Claudio Ranieri’s men are three points above the relegation zone after winning just one of their last eight games.

Two points back in 17th place, Palace begin life under new manager Sam Allardyce — appointed as the successor to Alan Pardew on Friday — with a trip to Watford. Liverpool, second, host Stoke City on Tuesday, with fifth-place Tottenham Hotspur visiting Southampton the following day. No sooner have those games finished than preparations for the breathless turn-of-the-year schedule — 20 games in six days — will begin.