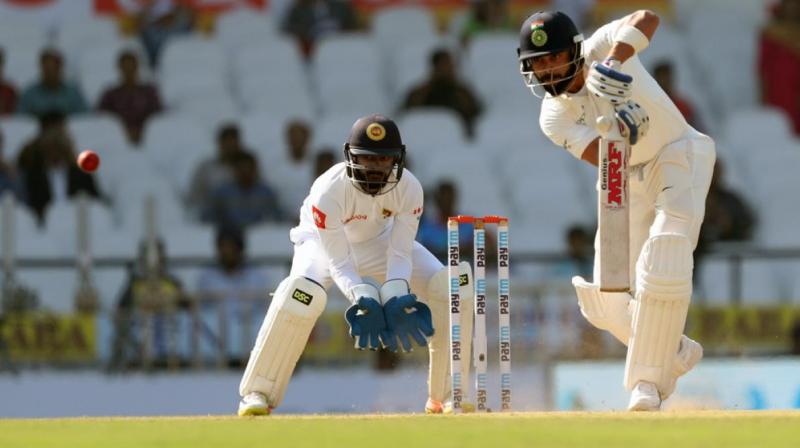 The India skipper notched up his 5th 200 in Tests. (Photo: BCCI)

Nagpur: Sri Lanka have struck early in the post-lunch session on Day 3 of the second Test here on Sunday as Ajinkya Rahane has got out for 2. But that hosts bounced back as Virat Kohli and Rohit Sharma struck a 173-run stand before Perera got rid of the India skipper. With a lead of over 380, R Ashwin and Rohit will aim to make it tough for the Lankans.

WICKET! Kohli's majestic double ton comes to an end and the crowd rises to applaud the skipper. Throughout his innings, he's made a mockery of the Lankan bowlers and departs going for another big shot. Kohli dances down the track to smack Perera over extra cover, but gets a top edge. Thirimanne at long-off takes a safe catch.

200 for Kohli! Top, top innings from the India skipper. Continuing his brilliant ton from Kolkata, Kohli battered the opposition bowlers to bring up his 5th Test ton. With the way he's going, looks like there's no stopping him.

Rohit Sharma brings up his 50! The Mumbai batsman has provided good support to skipper Kohli at the other end, that has resulted in a huge lead for the hosts. Fine innings this!

150 for Kohli! There's no stopping this man. Certainly not today. He is making merry as India's lead has moved past 250-run mark. Rohit Sharma too adding some quick runs as India continue their dominance against Sri Lanka.

WICKET! Ajinkya Rahane departs. Misses out on a chance to score big again. A hit-me ball from Dilruwan Perera and Rahane fails to cash. Early breakthrough for Sri Lanka in second session.

Sri Lanka managed to remove Cheteshwar Pujara but it was India’s session as Virat Kohli brought up his 19th Test ton on Day 3 of the second India versus Sri Lanka Test at the Vidarbha Cricket Association Stadium here on Sunday.

Pujara and Kohli, who resumed play on the overnight score of 312/2, added 87 runs more to their partnership before Dasun Shanaka broke through Pujara’s defence; the only bright spot for Sri Lanka in the first session on Day 3. Kohli, meanwhile, marched to his 19th Test ton, second hundred of the series and 10th ton in 2017 to break Ricky Ponting and Graeme Smith’s record of most number of hundreds in a calendar year for a captain

While Pujara did not score at brisk pace, Kohli was at his imperious best as he bossed the Sri Lankan attack. While the bowlers lacked spice, Sri Lankan fielding was also a letdown as there were a couple of overthrows. India, meanwhile, cashed in on every possible opportunity to score runs as they stretched the lead 199 runs with seven wickets still in hand.

WICKET! Finally, something goes past Pujara's defence. Finally, a breakthrough for Sri Lanka. Finally, the Pujara-Kohli stand is broken. But it is still advantage India.

HUNDRED! 19th in Test cricket, 51st in international cricket. 10th ton in 2017. Virat Kohli, the run-machine, has done it again. India all over Sri Lanka.

The runs have been flowing for the Indian Skipper as he scores his 19th Test ton. Second 💯 in the series so far. #INDvSL @imVkohli pic.twitter.com/oOUhMAhyCJ

Overthrows, easy runs, boundary balls and more; Sri Lanka have been miserable in the field as Virat Kohli moves into 90s and Indian lead sails past 150. Ominous signs for the visitors.

Over 40 minutes into the game on Day three and neither Cheteshwar Pujara and Virat Kohli looked threatened by Sri Lankan bowlers. While Pujara is taking his time to score at brisk pace, Kohli has added 20 runs to his overnight score of 54.

Can Sri Lanka turn around the game on its head? Or will it be Virat Kohli-led India who will continue to dominate the proceedings? These questions will be on everyone’s mind as the third day of the second India versus Sri Lanka Test kicks off at the Vidarbha Cricket Association Stadium here on Sunday.

After R Ashwin, Ravindra Jadeja and Ishant Sharma joined hands to bundle out the visitors for 205 on Day 1, the duo of Murali Vijay and Cheteshwar Pujara dominated the Lankan bowlers on Day 2 with a 209-run partnership. While Vijay got out after scoring a ton, Kohli joined Pujara as the two stitched an unbeaten 96-run stand by stumps on Day 2.

While Sri Lankan bowlers toiled, it was India who are in an advantageous position. With the likes of Ajinkya Rahane, Rohit Sharma, Wriddhiman Saha, R Ashwin and Jadeja waiting in the wings, scoring above 600 is not a far-fetched dream.