The national team will be preparing for the AFC Asian Cup qualifier game against Macau scheduled in Bengaluru on October 11. 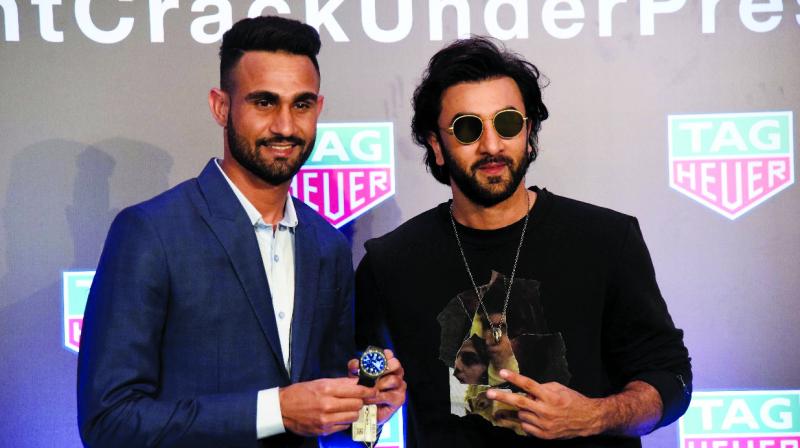 Mumbai City FC players including their talented goalkeeper Amrinder Singh kicked off their pre-season training in Pune from Sunday. Amrinder was with the Ranbir Kapoor co-owned ISL franchise last season but played just six games due to his engagements with Bengaluru FC, which did well in AFC Cup. However, he made an impression by keeping five clean-sheets in six games for Mumbai City and won the golden glove award.

In this prolonged ISL season that kicks off on November 17, he is ready for the challenge to serve full-time for Mumbai City. He has done well for Bengaluru FC in I-League and AFC Cup and also sizzled with his previous ISL franchise Atletico de Kolkata.

“Good performance always adds to the pressure and brings responsibility with it. But I will take on one match at a time and give my best. I have pulled my socks up and excitement is at its peak! All geared up for this new changed season,” he added.

The Punjab’s talented 24-year-old goalkeeper will have to leave camp in Pune midway though to join the senior national team’s training camp in Mumbai starting from September 28. The national team will be preparing for the AFC Asian Cup qualifier game against Macau scheduled in Bengaluru on October 11.

The Mumbai City camp in Pune is likely to continue till October 2. Immediately after that the city based ISL team is set to leave for Spain for about one month pre-season camp. Amrinder may miss the first week of the pre-season camp also due to national commitments.

“Currently I’m not sure about this,” he said.

Mumbai City, which has boasted of stars like Freddie Ljunberg, Nicolas Anelka, Diego Forlan and Sunil Chhetri in previous years will be without any major star player this season. However, Amrinder thinks the overall team makeup is well-thought.

“Overall team make up is well-thought, the team has new, young faces who all up the energy and will be positive for the team! We have signed really good players this season. Hopes are high, hopefully we will perform well,” said the former India U-23 team skipper who made his senior team debut against Mauritius recently.

Amrinder though will miss playing in the AFC Cup. Besides playing for Bengaluru FC, which reached the AFC Cup final, he had also played in the Cup for his former I-league team Pune FC.

“Playing in the AFC Cup has taught me many things and has been a huge boost in my career. I will miss that part but I’m definitely very excited about the upcoming ISL season with Mumbai City FC,” he said.

He is excited to work again with Gurpreet Singh Sandhu and senior goalkeeper Subrata Paul in the national camp. In fact Sandhu, who played for Norwegian club Stabaek, replaced Amrinder in the Bengaluru FC squad that will be playing in the ISL for the first time. Paul, who played a couple of seasons for Mumbai City, will appear for new franchise Jamshedpur FC.

India has been performing well under English coach Stephen Constantine in the last two years and Amrinder has seen it from close quarters.

He feels “change in training and seriousness for the sport,” has made the difference.

Besides working with Constantine, Amrinder has also worked with coaches like Ashley Westwood and Alexandre Guimaraes over the past one year.

“They are a few of the best people that I have been fortunate enough to learn under, and every one of them holds an important place in my life. They have been extremely encouraging and without them and their training I wouldn’t be where I am today,” he said.

Mumbai City made it to semi-finals for the first time but lost to ATK 2-3 on aggregate after finishing 0-0 in second leg semi-final at Mumbai Football Arena last year, which was memorable for Amrinder.

“The match I played against ATK was very nostalgic and memorable for me. And the fans in Mumbai. I have immense love for them,” he signed off.