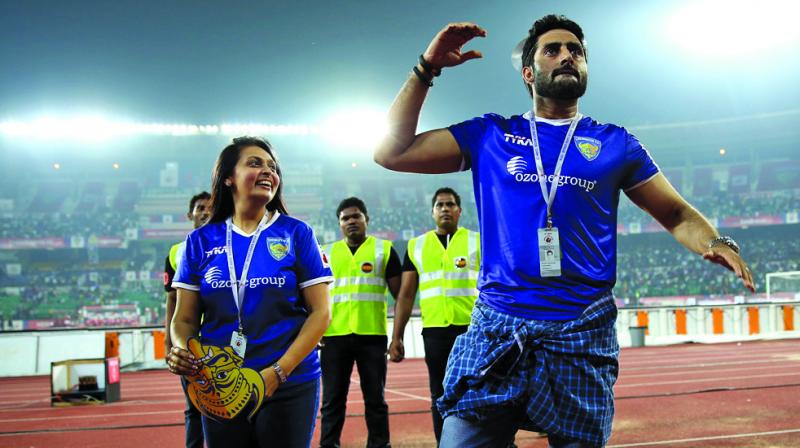 At the ISL draft, Chennaiyin FC co-owner Abhishek Bachchan picked four of their previous players for the fourth edition of ISL. (Photo: indiansuperleague.com)

City celebrities-cumsports devotees Abhishek Bachchan and Vita Dani are serving well their role for their Indian Super League franchise Chennaiyin FC as co-owners with cricketer Mahendra Singh Dhoni. Both of them have put their foot into multiple sports ventures in the country.

Chennaiyin FC won the Indian Premier League in 2015.  While addressing the club’s plans after the first few rounds of the ISL players draft, Abhishek said that the club would always go by the adage ‘family first’ — Chennaiyin FC retained the maximum of four players by any team for the fourth edition of ISL. It also picked four of its previous players.

Mumbai footballer Jayesh Rane, who was previously part of the Chennai franchise was on Abhishek’s list but Atletico de Kolkata grabbed him in the players draft. “In Chennaiyin FC, it is always family first,” said the actor about the draft changing the whole scenario of ISL.

“Vita is like the mother of the team. She has always been keen on retaining the maximum players from last season,” said Bachchan.  ISL in 2017 witnessed a sharp spike of over 103 per cent in domestic players’ salary as compared to the inaugural year of ISL in 2014, as the 10 clubs together had spent Rs 48.85 crore this year to secure signatures of 156 players at the end of the day-long ISL Indian Player Draft here in Mumbai. The ISL 2014 Player Draft, the first ever player draft held in India, had recorded a Rs 24 crore spend by eight ISL clubs.

The club has also hired former Aston Villa coach John Gregory who applauds the new policy, which only allows five foreign players in the starting 11 which will allow the young Indian players more playing time.

“If it’s a choice between foreign and Indian players, the foreigners always get selected. So I’m impressed with the new regulations that allow only five foreigners in the starting XI. That’s a positive step. That will ultimately improve the national team,” said the 63-year old, who will be filling Marco Materazzi’s shoes.

Indian forward, Jeje Lalpekhlua has been associated with the club since 2014, said, “I feel at home because of Abhishek and Vita. I love Chennai and the people there.” Jeje was previously serving Mohun Bagan FC on a loan spell for the last two seasons.